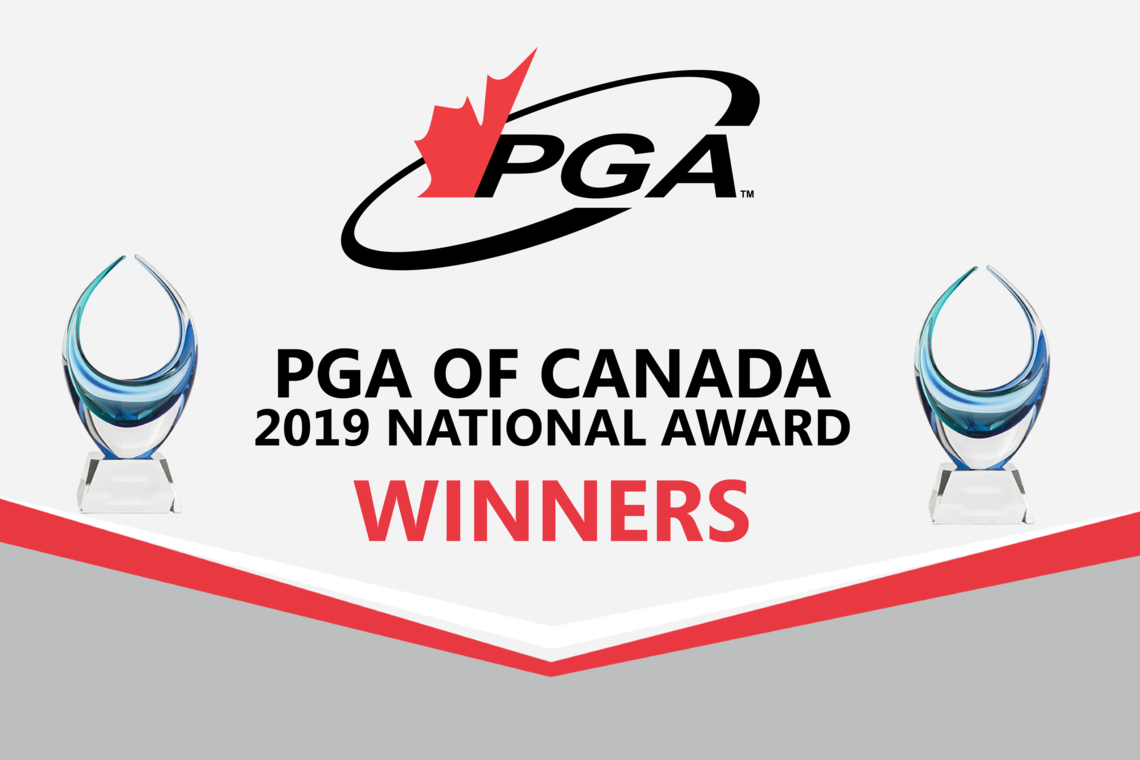 The PGA of Canada is proud to announce its 2019 National Award winners.

“I’m very proud to congratulate the 2019 PGA of Canada National Award winners and finalists. Our winners and finalists come from coast-to-coast and have an impressive list of achievements, from growing the game of golf to raising money for charities, supporting local communities, successfully managing facilities and retail operations, all while continuing to learn and improve themselves,” said PGA of Canada president Mark Patterson.

This was the first time in the association's history that the National Awards were live-streamed on Facebook and finalists were posted online. “This is a continued step to highlighting and recognizing the outstanding achievements of our members,” said PGA of Canada CEO Kevin Thistle. “We have so many great professionals across Canada who live and breathe the PGA of Canada every day. Check out our website and learn about the outstanding achievements of both our winners and finalists.”

Jonathan Garron’s performance in 2019 has been outstanding. His continued commitment to the PGA of Canada and specifically the Atlantic zone is second to none. Abercrombie Country Club is on pace for another exceptional fiscal year. Jonathan started a new social Ladies Golf program after applying and receiving funding through a Sport Nova Scotia grant. The program brought in 57 new women golfers to learn both the game and experience all that the club has to offer. Jonathan has also been able to tap into many different grant opportunities available to not-for-profits, bringing in approximately $20,000 to help the club in 2019 and nearly $75,000 over the last five years.

Jonathan continues to exhibit the leadership skills required to run a facility; his willingness to chip in and provide support to all employees and members allows for great successes at Abercrombie.

Jonathan Garron has served on the PGA of Canada Atlantic Zone Board for seven years and is currently in the role of President. In addition to Jonathan’s long-standing commitment to the board, he is a massive advocate for the PGA and the PGA Brand. Jonathan supports numerous initiatives launched by both the PGA of Canada nationally and locally through the Atlantic board. These include Future Links, Golf in Schools, Jr. League and the RBC PGA Scramble, where he has hosted both a local qualifier and participated in the regional final. In the Atlantic zone, Jonathan has hosted the PGA of Canada Atlantic Zone Pro Junior for the last five years, participates in the Cabot Pro-Am, Zone Championship & Callaway Team Championship, as well as attending the PGA of Canada Atlantic Education Conference. Locally, Jonathan does a lot to promote the game, volunteering for Special Olympics teaching and providing athletes with an opportunity to learn and play the game. Last year, Jonathan was fortunate to host our Armed Forces veterans in the Solider On program at Abercrombie Country Club.

Brian recognizes how important it is to be in the PGA of BC's Top 100 PDP, and to date, Brian and his team of four are all in the Top 100. Brian takes enormous pride in knowing that he is setting the stage and standard for golf professionals to become ELITE golf professionals and outstanding members of our community.

Brian’s role at Copper Point is not only to lead, mentor, guide, inspire and manage staff, but to make sure he understands each job that his team is required to perform.

He creates a clear vision and direction for all staff and meets weekly to discuss performance, outcomes and solutions, as well as maintain a clean, safe work environment. Brian and his team have contributed endless hours and funds to local charities (raising nearly $50,000 for a variety of charities).

Scott has been instrumental in my success as a professional golfer. We have been working together for over 14 years, and he is an integral part of me becoming a winner on the PGA TOUR. Scott has helped me build a swing that can challenge the best golfers in the world on a weekly basis. His insight and attention to detail are world-class.

There is no one more suitable for my game than Scott. I can confidently state that there are not many other instructors in the world with his knowledge, experience and dedication to the game and his students.

Scott is a true gentleman of the game and ambassador of the sport. A role model on and off the course, he would be an asset to anyone who has the privilege to work with him.

In 2019, Paul accepted the role of Associate Professional at the Tor Hill Golf Course. In this time, he started a non-profit business, Regina Junior Golf Inc. (RJG). The goal of RJG is to grow the game of golf at a grassroots level. This includes partnerships with the Regina School Boards as well as the City of Regina. The company hires local golf professionals to help with Golf in Schools Nights, managing the junior leagues at Joanne Goulet and setting up field trips for local school children to take clinics and tour golf facilities. Paul is responsible for overseeing the Junior Programs at Tor Hill, Joanne Goulet Golf Course and Lakeview Par 3.

On a national level, Paul and RJG incorporate the Canadian Future Links Program, where he hosted Golf in Schools Nights, which reached 160 children and parents at five different Regina Public Schools. This summer, he hosted a Future Links Skills Competition for the Goulet Junior League.

Steve focuses on knowing his customers and members to the best of his abilities. “We know our customers, but it is the responsibility of all retailers to know their customers, as well.” He knows what they wear, their size, what ball they play and what equipment they gravitate towards. Steve listens to his customers through annual surveys, paying attention every day, and talking to the members. This information is crucial to buying products and sizes appropriately. Steve is always open to introducing new products and exposing our customers to new brands. Members like to try new things, and Steve provides that opportunity each year.

In his short time within our association, Chris has established himself as an involved member of the PGA of Canada. He served on the PGA of Alberta Consumer Show Committee and has taken on the responsibility of the Junior Teaching area. Chris has volunteered at the Calgary Consumer Show in many different capacities since 2016.

In 2019, Chris ranked 15th in the PGA of Alberta's Top 100 Professional Development rankings, which includes all categories of membership. This award recognizes members who support all facets of the association, including playing, education and volunteerism in support of the PGA.

Chris has also played in 20 PGA events at the provincial and national level over the last two years, as well as volunteered with the PGA on Wheels with the Canada Day celebration in Canmore. He has attended the spring education seminar from 2015 to 2019 and put his name up for the past two years to serve on the Alberta Assistants' board.

Samuel has won numerous awards with the PGA of Alberta, including Assistant Professional of the Year for both Apprentice (2016) and Class “A” Professional (2019), and the Professional Development Award (2018). Sam is one of the top players in the PGA of Alberta, teaches over 300 hours on his own time, volunteers within the Alberta zone, and manages his extensive list of responsibilities at the club. Samuel's dedication and passion toward our profession and his growth as a Golf Professional are second to none.

Cory is very involved at the zone level, participating and attending all zone-level seminars, serving as Education Chair for the past three years, past President in 2015 & 2016, and sitting on the Manitoba Zone Board for eight years.

To help grow the game, he has hosted numerous educational seminars at St. Charles to help educate his team and PGA of Canada Professionals in Manitoba. He is certified in several programs, such as AimPoint, TPI – 1 to 3, Swing catalyst and BodiTrack.

For 40 years, SCOREGolf has been the trusted voice in Canadian golf, providing stories that have inspired amateurs and professionals alike. “From their industry analysis to their coveted SCOREGolf Top 100 Rankings, their influence on golf in Canada has been monumental,” said PGA of Canada President Mark Patterson.

Master Professional and Life Member Michael Schurman will be proudly inducted into the PGA of Canada Hall of Fame during PGA of Canada Night presented by DCM on Jan. 23.

Throughout his 50-year career, Schurman dedicated his efforts to better the industry, his peers and the greater golf community. He is one of 24 members in the association's 109-year history to achieve Master Professional status; has served on the board of directors for the PGA of Ontario and PGA of Canada; and is a past president of the PGA of Ontario—just a few of his many highlights.

The entire slate of award winners will be honoured at the association’s PGA of Canada Night celebrations in Orlando, Fla., as part of the PGA Merchandise Show. PGA of Canada Night takes place on Jan. 23 from 5-7 p.m. in room W340 (Sunburst Ballroom).