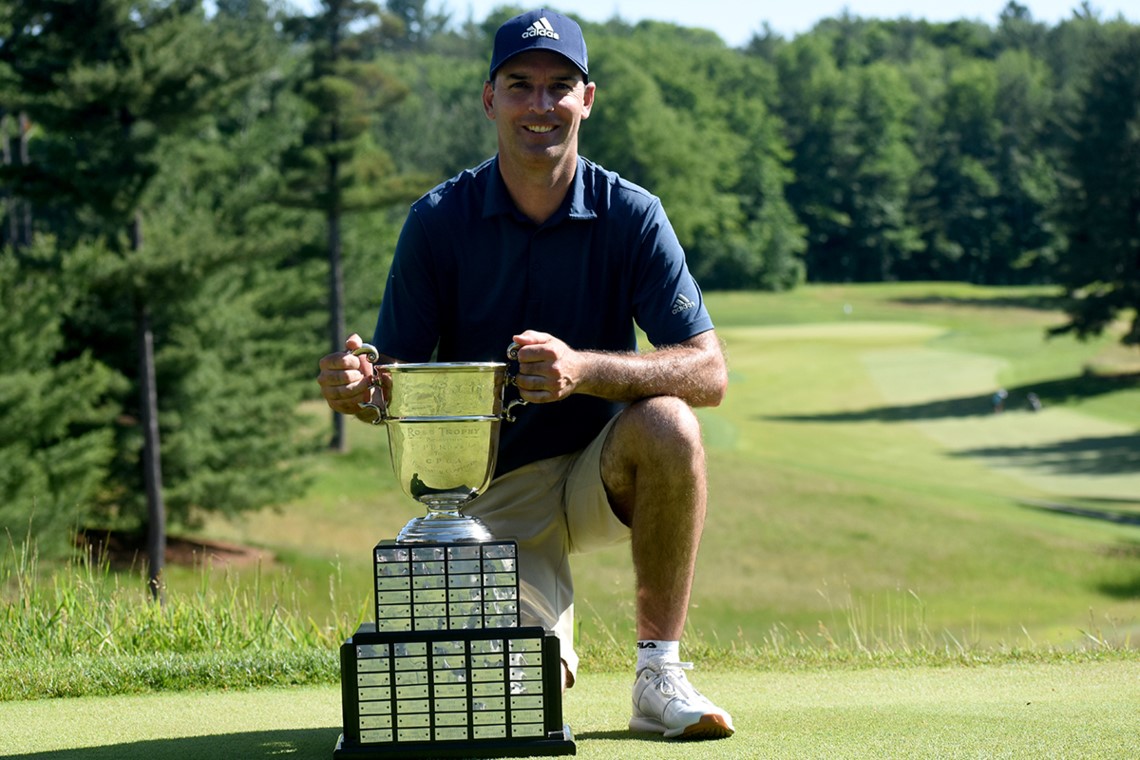 (Aurora – ON) – On Friday afternoon at Beacon Hall Golf Club, Wes Heffernan put a bow on a dominant performance at the BetRegal PGA Championship of Canada, going wire-to-wire to cement himself as the winner of the 100th anniversary of the event by a margin of five strokes, shooting scores of 68-69-69-72 to do so.

Full results and purse breakdown can be seen here.

“I’m not sure it has sunk in yet. Today was a challenging mental day with the lead and trying to keep that lead, but I played really well, which was very fulfilling,” said Heffernan, who came into the week as the top player on the PGA Player Rankings and takes home $12,000 with the victory. “I didn’t make any mistakes until the end, and I had a nice cushion by that point.”

It didn’t take long for those bearing witness to realize that there would be no coming back to the field for Heffernan on Friday.

Off the tee this week, Heffernan was impeccable. The only thing perhaps more impressive was his ball striking, as he gave himself good birdie look after good birdie look on the firm and fast Beacon Hall greens.

After knocking in a 12-foot birdie putt on the second hole, Heffernan cruised through the front nine with eight consecutive pars, with none of the par putts being further than three feet.

As Heffernan noted, a bogey followed by a double on 16 and 17 put a dent in his lead, but by that point, there was nothing between the 45-year-old and the first P.D. Ross trophy of his career.

“I know the tournament has had quite the history and there’s been some fantastic players at this event. I got to play with Jim Rutledge the past two days, who is a Canadian legend, and he is on the trophy as well,” said Heffernan – who’s five-stroke winning margin came over the runner-up Rutledge. “I was fortunate enough to share these past two rounds with him and I was fortune to come out on top.”

With the victory, Heffernan becomes the third-consecutive Albertan to win the event after Dustin Risdon’s victory in 2019 and Riley Fleming’s win last summer.

“I have a lot of great family and friends to thank back home for their support,” said Heffernan, who teaches out of the Dynamic Motion Golf Performance Center. “Some people thought it was only three rounds, so I actually got some congratulations texts yesterday, so I was happy to be able to get it done today”

The 2022 tournament marked the second with BetRegal as title sponsor, and their support is certainly appreciated from the players in the field.

“Without their sponsorship we couldn’t play an event like this,” said Heffernan. “I was fortunate to play with Mike (Mirtle, CEO of BetRegal) and Aly (Lalani, Head of Marketing) during the pro-am and it was a great time. Without sponsors that support golf in Canada we can’t have these great championships.”

In addition to BetRegal, it was incredible to have support from BioSteel, CaddyTime and adidas Golf Canada at the event.

Beacon Hall Golf Club served as an exceptional test of golf as players raved about the conditions all week long, mentioning that the layout had a ‘major feel’ to it.

While Heffernan turned in a score of 10-under par, only three other players were able to break par for the tournament – Rutledge, Gordon Burns, and Fleming. And while Heffernan broke 70 in three of the four rounds, no other player was able to do it more than twice – and the only player to do that was Fleming.

The PGA of Canada is quickly back on the road next week as the ORORO PGA Women’s Championship of Canada kicks off on July 28 at Chateau Bromont in Quebec, where some of the top amateur and professional players from both Canada and the world will vie for a victory and exemption into the CP Women’s Open.

Photos from the event can be found on our Flickr page, here.