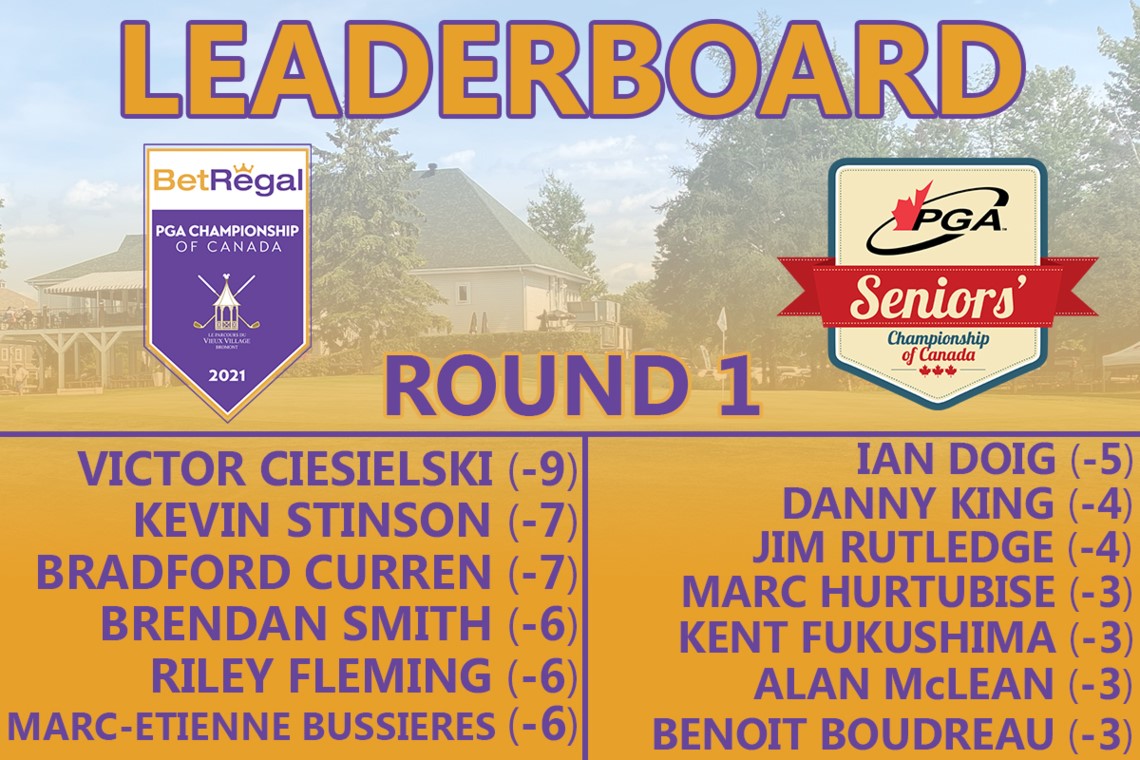 (Bromont – QC) - After a year without a PGA of Canada National Championship due to the COVID-19 pandemic, the association was back in full force on Wednesday, announcing BetRegal as the new title sponsor of the BetRegal PGA Championship of Canada presented by TaylorMade Golf and adidas Golf minutes prior to Justin YW Kim hitting the first tee shot of the 2021 tournament season. Full leaderboard can be seen here.

The deal inked between the PGA of Canada and BetRegal is a three-year agreement which comes on the heels of the Canadian government passing Bill C-218, legalizing single-game sports betting in Canada. For full details about the National Partnership, see today’s release here.

BetRegal’s involvement with the event could not have come on a more exciting day – especially with the PGA Seniors’ Championship being held in conjunction with the BetRegal PGA Championship of Canada presented by TaylorMade Golf and adidas Golf - as Golf Club du Vieux Village saw its course record of 63 matched late in the day by PGA of Ontario and Galt Country Club pro Victor Ciesielski.

“It was an easy group playing with Yogi (Yohann Benson) and Alan (McLean),” said Ciesielski, who leads by two strokes over Kevin Stinson and Bradford Curren. “We’ve known each other for a long time, so there were lots of stories and lots of laughs, it was a pretty great day.”

Ciesielski started his day with four birdies in his opening six holes, with his only blemish of the day coming on his 12th hole. Luckily, that bogey was sandwiched between back-to-back birdies before and after.

“I made a bogey and a couple of loose swings on the par-5s on my front nine that are very gettable,” said the 2020 PGA of Ontario Zone Champion. “I blocked a couple right and ended up being okay, laid up and made par, and then birdied the other, so I came out unscathed when I could have kicked right and been out-of-play.”

Echoed throughout the day by fellow players, Ciesielski emphasized how exciting it was to be back on the national scale competing alongside peers from across the country – especially on a day kicked off with a landmark announcement.

“This is the route we are going, and I love it. it started with social media and that’s what exploded and now it’s sports gambling,” said Ciesielski. “I’m not much of a gambler myself, but I do love betting on myself – we’re all looking forward to it and I’m excited to see what (BetRegal’s) platform is like.”

On Tuesday, Focus Golf Targets conducting an activation on the first tee of the practice rounds, giving pros three shots to hit one of their driving range targets that was placed 40 yards away. The player to come the closest with their three shots won $500. Well, the only pro that nailed all three shots was Ian Doig.

As fate would have it, it was a sign of things to come, as Doig made six birdies on the back nine on Wednesday to shoot a 5-under 67 to lead the Seniors division by one stroke over Danny King and Jim Rutledge. He also leads the Super Senior division by one over Rutledge.

National Partner NoSweat has been handing out product to players throughout the week, as well as a $250 prize each day to a player that conquers the NoSweat Hardest Hole of the Day.

The hole chosen as the “Hardest Hole of the Day” on Wednesday was No-15, which played .23 strokes over par. There were 13 players who made birdie on No.15, and after running the names through a random generator, Kent Fukushima wins the first NoSweat prize of the week.

LivRelief has also been handing out product of their pain-relief cream throughout the week, which players have been raving about. Could that play a part in Wednesday’s low scores?

First tee time for the second round, which also signals the final round for players only competing in the Super Seniors division, is set for 8 A.M. EDT.

Quotes of the Day:

“I played well, I didn’t make many mistakes and they were pretty easy chip shots when I did. The pro-am yesterday, we saw the course and some of the greens are really severe and you can’t be above it - but I did a good job of avoiding that. Other than that, I had easy putts I could be aggressive with.”

“My caddie came out from Calgary with me and gave me some clear ideas and lines which was awesome, and we just had a good day, it was a lot of fun.”

“I birdied four of the five par 5s and there will be some guys who play those 20-under for the week. The three on the front are pretty easy, 18 is a tough tee shot but it’s gettable, I hit 7-iron in today. 12 is a good one. I smashed driver and 3-wood to get there, it’s a big hole. You have to take advantage of those if you want to play well.”

“My irons were really good today. I just played smart, played my plan, the irons were struck well, and I made some putts.”

“It’s pretty awesome to be close to home and have that advantage. I know the course, which is nice and I’m going to keep my same game plan tomorrow. We’ll see what happens with the weather and if there is a little bit more wind. It was nice playing early today, but tomorrow in the afternoon it’s going to be a different game and we’ll see what we can do.”

“I think everyone is itching to play again. We’ve been shut down and it shows in the entry that everybody wanted to play. To do both tournaments at once is not a bad idea, it’s nice to see the PGA of Canada back to full rounds, as well.”

“I left a couple out there, but overall, it was a good round considering the amount of golf I’ve played the past year. I’m just happy to be back on the golf course.”

“I’ve played out here many times over the years in Quebec, a few Champions Tour events and back in the old days of the Canadian Tour, but that’s about it.”

“It’s a mix for me between preparing a socializing. Seeing the guys I’ve played golf with for a long time is great. I know a few of the younger guys, which is great too, because I just love seeing them.”