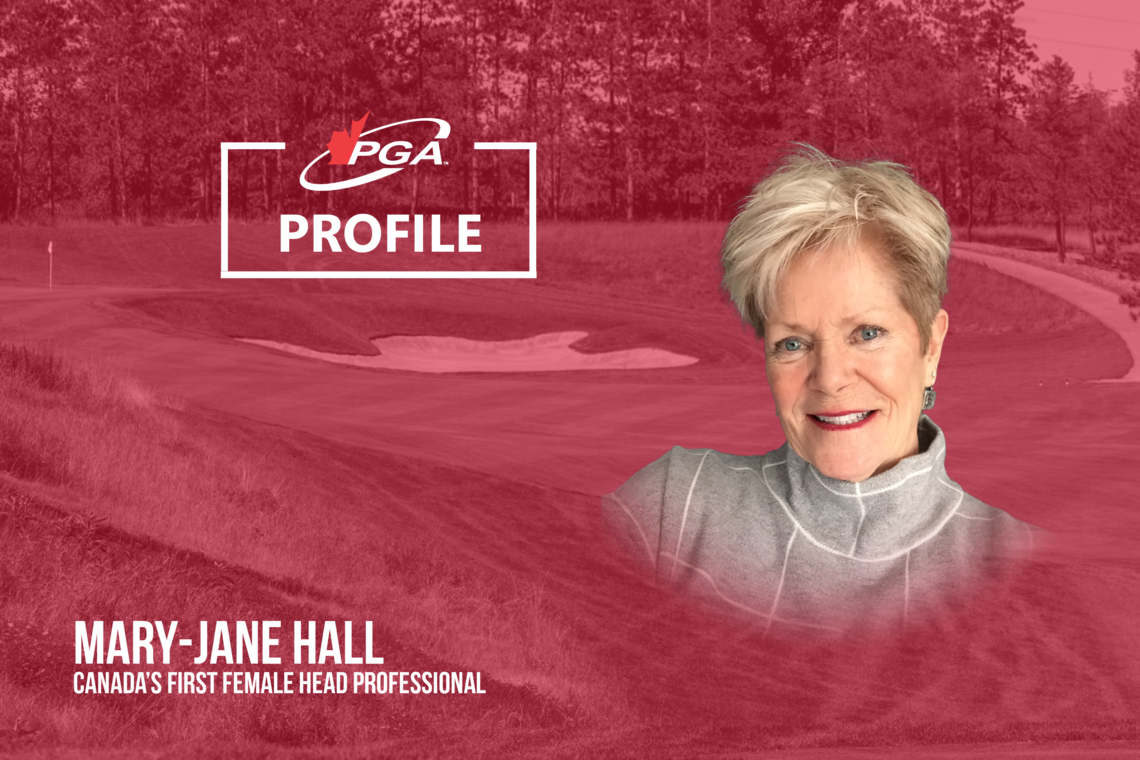 Mary-Jane Hall is no stranger to travelling unmarked tracks. These days it’s snowshoeing around the Niagara region after a whiteout, but nearly 50 years ago the now-retired PGA of Canada member had to navigate a much tougher landscape.

Born in Mississauga, Ont., in 1952, Hall grew up in an era when golf was dominated by men. Men on tour; men working in pro shops; men playing the game. But Mary-Jane’s parents, especially her father, had an affinity for golf and some of her fondest memories are the school nights the Halls would head to the driving range.

“Those would be the nights that my dad and my mom would take me to the Andy Bathgate Centre and after that we would get an ice cream cone,” she shared.

Hall’s junior talents included a few local and provincial victories and over time she began to relish the competition the game presented, internally and externally. Striving to be the best player and person she could be was her only goal.

That mantra — which she still lives by today — was carried to Montreal at 21 years old after a chance meeting with Ron Bolus, the head professional at Hillsdale GC, who welcomed her under his wing. Bolus taught Hall the ins-and-outs of being a pro and encouraged her to apply for membership with the PGA of Canada. She took his advice and became the first female golf professional in Quebec, which led to another opportunity at Royal Montreal GC.

By the time she moved to Brightwood GC in Darmouth, N.S., becoming the first female golf professional in Atlantic Canada, and then earning a Class A certification soon after, she had recognized her path in golf was wandering without a destination.
But her journey took an important turn when Paul Villemaire, the head professional at the Ladies’ GC of Toronto, recognized her name among the applicants for an open associate professional position. She was an easy hire since Villemaire had previously met Hall when the two crossed paths at Royal Montreal years prior. Being familiar with her friendliness and knowing the club wanted to add women to its staff, Hall checked all the boxes.

“She was great in the shop, the ladies loved her,” remembered Villemaire, adding that Hall was also a solid player and teacher.
But two years later, when Villemaire pivoted to a position at Elmhurst G&CC in Winnipeg, it was only natural who should step into the role. The Ladies’ GC of Toronto, the only golf venue in North America that was created for and by women, made Hall the first female head golf professional in Canada in 1981. In her heart, she knew she had arrived at her new home.

“I was honoured and absolutely thrilled to be in that position,” she described, reflecting on the 33 years she devoted to the club before retiring in 2011. “The Ladies’ Golf Club was my life for a very long time.”

Once settled as the head pro at Ladies’, Hall continued to be a pioneer and believed it was part of her duty to represent the club in PGA competitions. She bravely entered events against men, becoming the first woman to compete in the association’s national championship. It was an important statement she was making, albeit one well beyond her comfort zone.

“I was not fearless! I was full of fear but I did it anyway,” Hall recalled.

“I remember one event in particular, it was in London, and I think they had the tees back at the black. And I could hardly make the fairway.”

Hall’s confidence took a hit after those events but the support she received from her members and peers helped soften the sting. It eventually became a turning point and motivated her to create a new path for herself and future female members.

As more women pros arrived on the Canadian scene, including Shelley Woolner, Cathy Sherk and Laurie Rybski, a small nucleus began to form and that sorority wanted to swing for its own trophies. Hall became instrumental in establishing the Women’s division within the PGA of Canada and helped create its marquee competition, the PGA Women’s Championship of Canada (now sponsored by DCM). It was first contested in 1987 with the likes of Sherk, Gail Graham, Lorie Kane, Alena Sharp, Brooke Henderson and, most recently, Rebecca Lee-Bentham having hoisted the trophy.

“I think the PGA was open to it,” said Hall, on the emergence of competitions specifically for women. “Certainly the committees were all male-based and I think that they understood that if they wanted more women in the industry, they had to embrace certain things. And playing is one of the things that a professional does.”

While she was successful in pushing the PGA to expand its competitive events to include women and is happy with the positive growth in the industry, the 2005 Ontario Golf Hall of Fame member — who is quick to thank the members at Ladies’ that advocated her case for enshrinement — admits there is still room for improvement. Specifically, more work needs to be done to ensure women not only join the association but that they are afforded time to play and practise in order to then feel comfortable registering and representing their clubs in those tournaments.

“I would like to be more inspired,” Hall explained. “I don’t think that there are as many women involved as I would like to see at this point in time.”

“I think every club that has female members should have a female professional on staff. They bring a new dimension to the teaching programs and to everything else, because men and women think differently.”

For women already in the industry, Hall is an incredible resource who has a lifetime of lessons to share. Her perspective on surrounding yourself with positive people is relatable but the risks she took and the courage she demonstrated makes her an inspiration. Lindsay Knowlton, a PGA of Canada professional who founded Iron Lady Golf, can attest to the impact Hall has had on her and undoubtedly many others.

“What she’s done and the path that she’s forged is just incredible,” said Knowlton, raving about how welcoming Hall was. “Winning the 2000 Ontario Junior Girls at the Ladies’ GC was my first interaction with Mary-Jane and I’ve always looked up to her since. Being able to go to her and her being so open to me and to this idea I had and to help me get it off the ground, I am forever grateful.”

Over her career, the contributions Hall has made to the game of golf have been significant. She still carves out time to teach — “One of the biggest things of all, and I would say this to anybody, is to teach kindness. People respect kindness” — but is more than happy to be back as a student, expanding her education in the area of wine.

Which isn’t shocking; it’s yet another path she’s set on conquering.