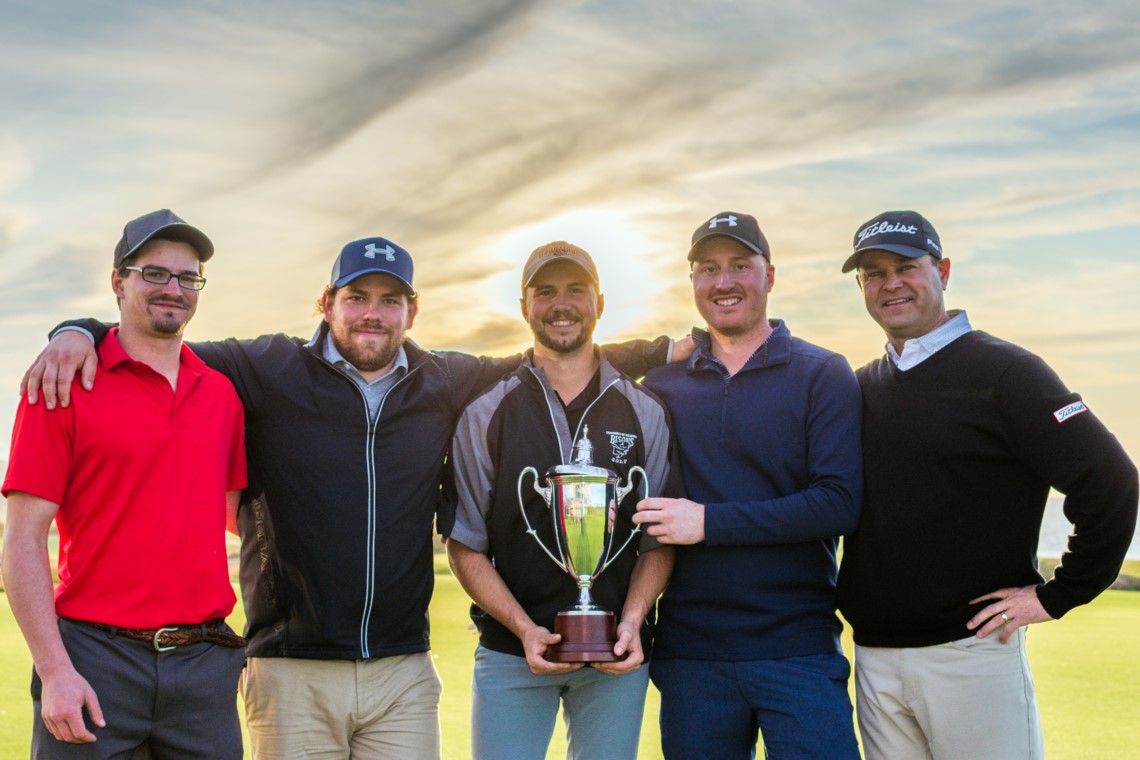 The Carman Closes it Out at Cabot Links

A year removed from finishing dead last in a local qualifying event in Manitoba, the team from The Carman Golf and Curling Club is now the best in the country, winning the 2019 RBC PGA Scramble presented by The Lincoln Motor Company National Final.

“Honestly, we’re probably about as surprised as anyone,” said the team from Carman about the national championship Tuesday at Cabot Links. “We came here this week with literally zero expectations. Our goal was to embrace the Cabot Links experience and we just happened to play really well, too.

At 59.4-under-par through three rounds (two at Cabot Links and one at Cabot Cliffs), they certainly played well. The four amateurs—Jared Aubin, Josh McCharles, Brett Maloney and Bobby McNair—and PGA of Canada professional Dean North dominated the championship from start to finish, winning by an astounding 6.9 shots over the second place team from The Landings of Kingston, Ont.

Ottawa’s Rideau View Golf and Country Club rounded out the top three with a cumulative net-score of -51.4.

Taking place Oct 6-8 at the world-renowned Cabot Links and Cabot Cliffs, the RBC PGA Scramble presented by The Lincoln Motor Company National Final sees 21 teams—comprised of four amateur golfers and one PGA of Canada professional—playing in a 54-hole national championship.

“Cabot Links and Cabot Cliffs are without a doubt the most amazing two-golf course experience in Canada, if not the entire world,” Carman said about the week’s host venues. “And it’s not just the golf courses that are amazing this week, either,” they admitted, adding, “we’ve been treated like tour players from the second we got here. There’s not enough we can say about how great having RBC, The Lincoln Motor Company and The Glenlivet as partners in this championship.”

“We here at Cabot were thrilled to host the RBC PGA Scramble presented by The Lincoln Motor Company National Final,” said Cabot Links’ General Manager Andrew Alkenbrack. “I feel our team put on a fantastic show over the past number of days for all of the amateurs and PGA of Canada professionals from around the country. I know our team will have incredible memories of this experience and I do hope that our guests for this very special event will feel the same.”

Canadian Golf Hall of Fame member and golf media personality Bob Weeks will be on-site during championship week as an honorary starter for the final round at Cabot Links, as well as host emcee for the championship's closing ceremonies. PGA TOUR player Ben Silverman will also be on hand at Cabot, adding to the overall atmosphere and experience of the event.

Those not playing in the RBC PGA Scramble of Canada presented by the Lincoln Motor Company National Final can relive all the action throughout the week at Cabot Links through social media. Watch on Facebook Live with multiple live streams—which include player interviews, behind-the-scene looks, drone flyovers and closing ceremonies, and more. Follow along on Twitter and Instagram as well for great social content.

To learn more about the RBC PGA Scramble presented by The Lincoln Motor Company, CLICK HERE