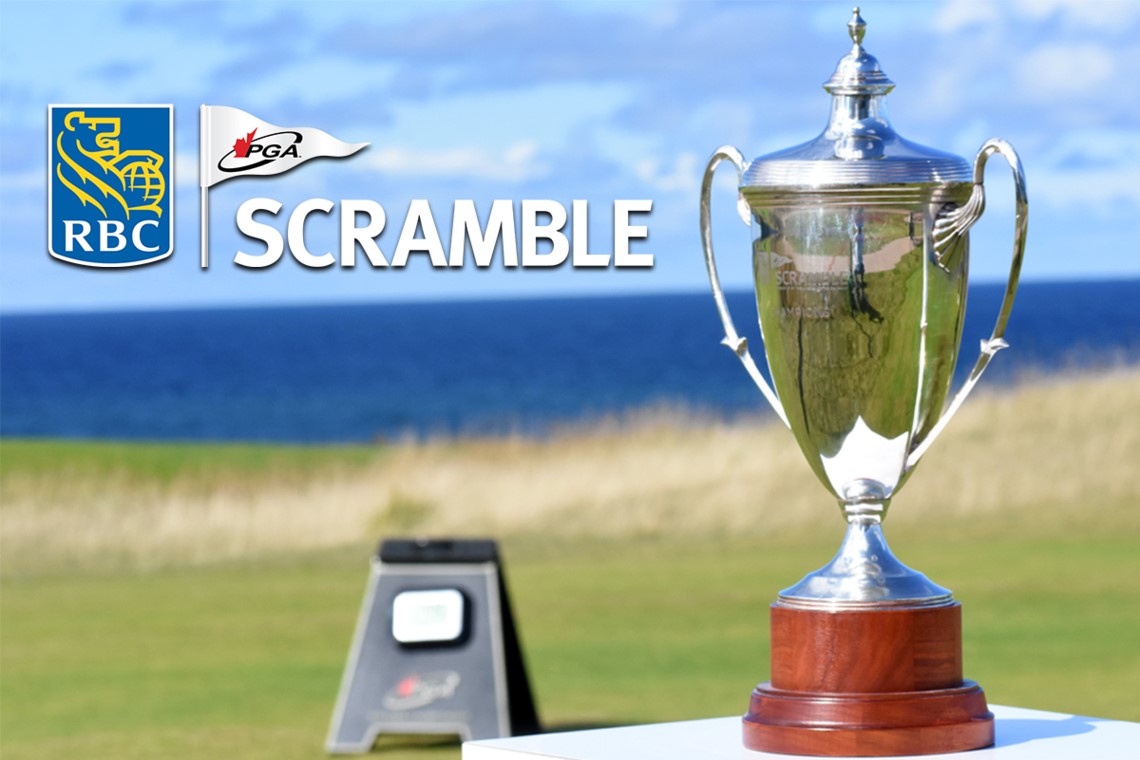 Twenty teams – comprised of four amateurs and one PGA of Canada professional, were treated to quite the experience on Sunday, playing the opening round of the RBC PGA Scramble National Championship in relatively calm and warm conditions on the Cabot Links course.

Located in Inverness, N.S., Cabot Cape Breton is Canada’s first and only authentic links golf resort. Nestled between the Atlantic Ocean and the picturesque town of Inverness, the Cabot Links course represents a dramatic departure from the typical golf excursion. With six holes playing directly alongside the water and every hole offers an ocean view, Cabot Links is where traditional links-land golf comes to life against the spectacular Nova Scotia landscape.

For the full leaderboard from the first round, click here.

Leading the day off at 8:30, the team began the first round with three-consecutive birdies and eventually signed for a gross 62 (net 46) to take the early lead.

“We have played in local qualifiers half a dozen times and never made it through that round,” said Richer. “We were fortunate this year to get out of the local qualifier this year and then Jennifer (Stairs) was our superstar in the Regional final, making 300 feet worth of putts.”

“It was crazy, everybody stepped up when they needed to,” Stairs added.

“You’ve got to have a crazy lucky round to make it to this final and we feel very fortunate to be here. We feel like we’ve already won,” Richer said.

That gratitude towards RBC, Cabot Cape Breton and the event in general was echoed by the team from the Lake Joseph Club comprised of Ryan White, Braden Dennis, Noah Suissa, Connor Ledger and Lake Joseph Club Director of Golf Trevor Marko a few hours later.

“I literally can’t describe what an event this is, we’re having so much fun. This is such a great vibe and we’re having a blast,” said Dennis, who’s group’s accommodations were upgraded to a villa by RBC Avion thanks to members of the group being RBC Avion credit card holders. “The first tee, to have Bob Weeks announcing our names, we’re amateur golfers and it felt like a TOUR experience.”

Up until the final hole of the day, the group of guys had a nearly perfect card, making only one par with the rest of their scores being birdies and eagles. Even with a bogey on the final hole, the group shot a gross 54 and leads by 2.9 strokes.

“We’re feeling so much love from back home, and we know we’re representing Ontario and Lake Jo, and we are so grateful for this opportunity,” added White.

Kicking off the weekend on Saturday night was the inaugural Night Golf Shootout on the first hole of The Nest, a brand-new 10-hole par-3 course at Cabot Cape Breton with stadium lighting.

Each team elected one player to compete in a closest to the pin championship. The top five players then went back to play the entire hole over again to find a champion. Lake Joseph qualifier Jonah O’Connor was the closest to the pin, lipping out from 95-yards and finishing 1-foot away from the hole. As fate would have it, O’Connor won the entire competition after making par on the play-through and draining a 12-footer in a putt-off against four players to win a prize pack for his entire team.

Stay tuned the rest of this week on our social media channels as we bring you all of the action from the RBC PGA Scramble. Twitter/Instagram.