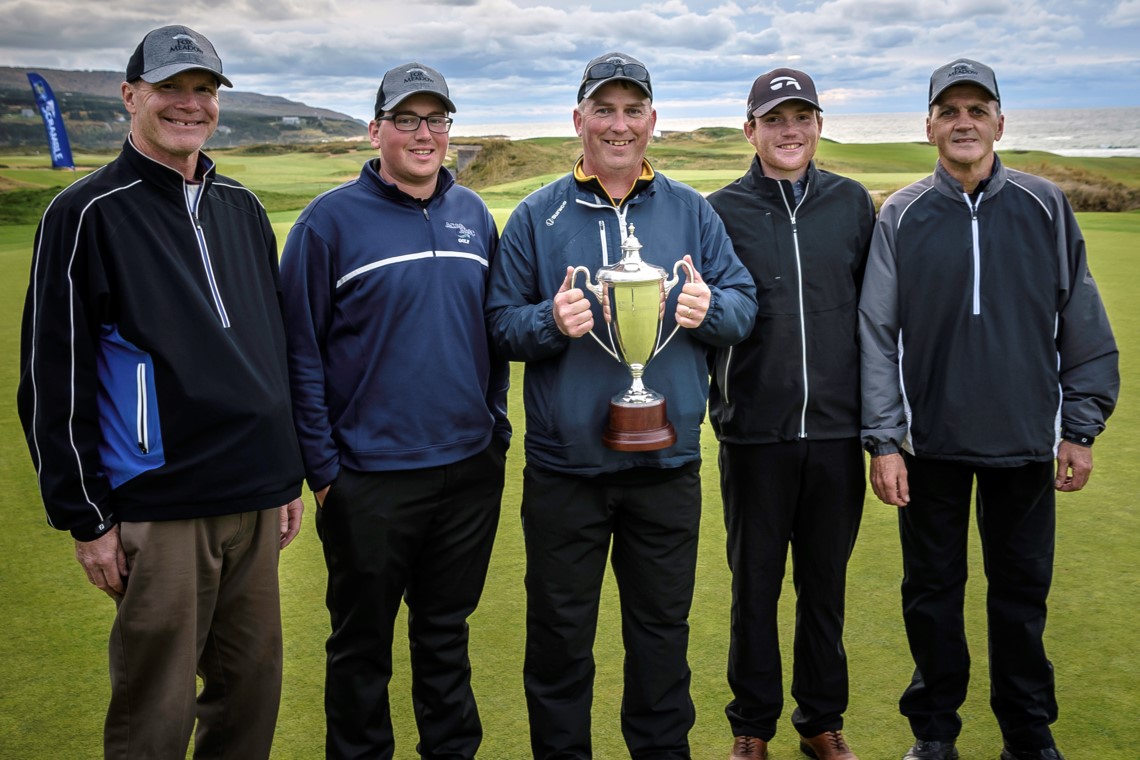 The 2018 RBC PGA Scramble presented by The Lincoln Motor Company National Final was won by the narrowest of margins Saturday at Cabot Links.

Fox Meadow Golf Course in Stratford, P.E.I., finished the 54-hole national championship at the world-famous Cabot Links with a score of 53-under-par, a mere 0.1 better than the team from Ontario’s Whistle Bear Club.

“What an absolutely amazing experience this entire week has been,” said the Fox Meadow team. “Obviously winning the national championship is very special, but the experience has been much more than that for us—it’s been a journey that we will never forget for the rest of our lives.”

The RBC PGA Scramble presented by The Lincoln Motor Company saw nearly 9,000 golfers from across the country participating in the series of events this summer. The 21 teams participating at Cabot Links—which are comprised of four amateurs and a PGA of Canada professional—all made it through local and regional qualifying events.

“We are thrilled to have provided thousands of amateur golfers from all across Canada an experience they will never forget in this unique championship,” said RBC’s Regional Vice President, Business Financial Services Michael Lordon. “The atmosphere and excitement during this week’s national final at Cabot Links will only to continue to elevate the growth of this program across Canada.”

The team from The Golf Club at Lora Bay finished third at -50.4, while local Nova Scotia favourites The Links at Brunello came in fourth at 50-under-par. Last year’s national final winners Cordova Bay and Scarboro Golf and Country Club rounded out the top five at -49.4.

“We here at Cabot were thrilled to host the RBC PGA Scramble presented by The Lincoln Motor Company National Final,” said Cabot Links’ General Manager Andrew Alkenbrack. “I feel our team put on a fantastic show over the past number of days for all of the amateurs and PGA of Canada professionals from around the country. I know our team will have incredible memories of this experience and I do hope that our guests for this very special event will feel the same.”

Canadian Golf Hall of Fame member and golf media personality Bob Weeks was on site during championship week to handle emcee duties at the opening ceremonies and as honorary starter for the first round and second rounds at Cabot Links. Canadian sports telecaster Daren Millard will also be on hand as honorary starter for the final round and as emcee for the championship's final ceremonies.

In addition to the opening ceremonies, participants in the national final are treated to two RBC dinners at the Panorama restaurant, as well as two receptions by The Lincoln Motor Company and a closing ceremonies event.
The RBC PGA Scramble presented by the Lincoln Motor Company saw thousands of golfers from across the country participate in the series of events this summer. The 21 teams participating at Cabot Links made it through local and regional qualifying events.

Those not playing in the RBC PGA Scramble of Canada presented by the Lincoln Motor Company National Final relive all the action throughout the week at Cabot Links through social media. Watch on Facebook Live with multiple live streams—which include player interviews, behind-the-scenes looks, drone flyovers, opening and closing ceremonies, and more. Follow along on Twitter and Instagram as well for great social content.

To learn more about the RBC PGA Scramble presented by The Lincoln Motor Company, CLICK HERE