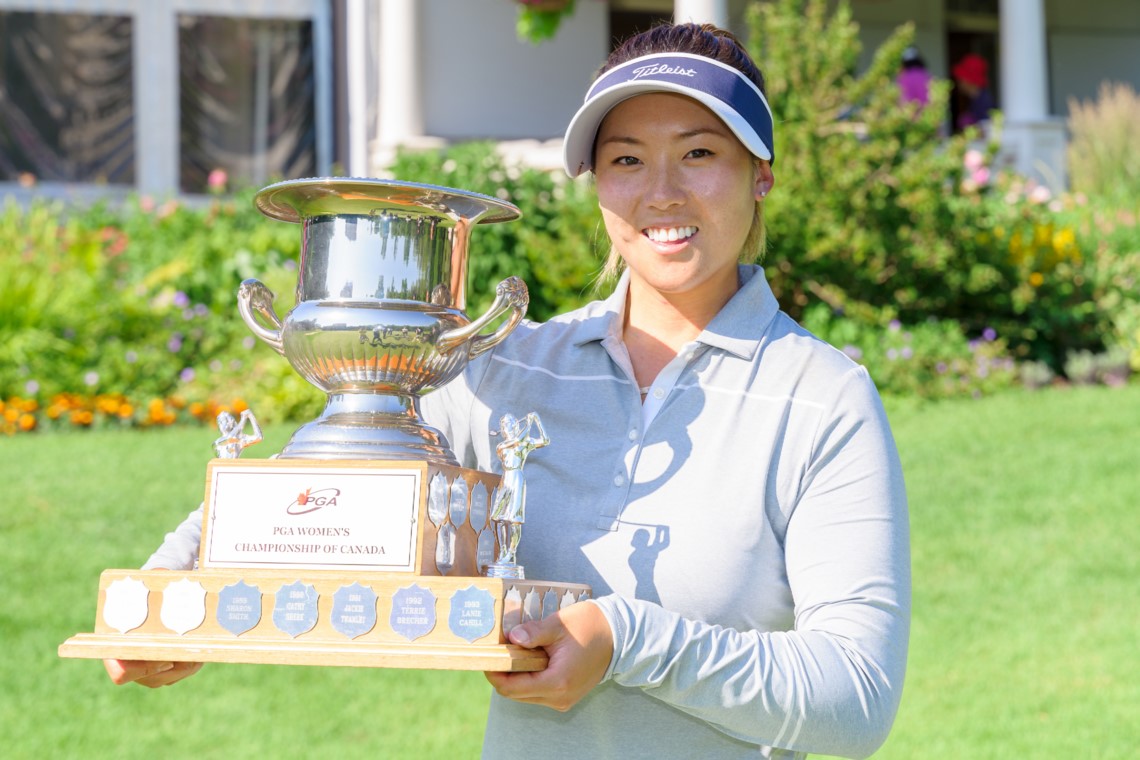 It wasn’t long ago that Rebecca Lee-Bentham walked away from chasing the dream of playing competitive professional golf at the game’s highest level.

Somewhere along the line the former Canadian National Amateur Team standout and LPGA Tour player lost her passion for competitive golf. She wasn’t the first golfer this has happened to and she certainly won’t be the last. But, as golf has a way of doing, pulled her back.

And today, the 27-year-old from Markham, Ont., can officially say she’s back on track to the long and winding road of competitive professional golf after winning the DCM PGA Women’s Championship of Canada in thrilling fashion Thursday at the Ladies’ Golf Club of Toronto.

Lee-Bentham posted a final round 9-under-par 63—both a new course record at Ladies’ Golf Club of Toronto and personal best—to come from behind and claim the title by four-shots over last year’s winner Jessica Porvasnik.

“I really leaned on my past experiences today,” Lee-Bentham admitted after her round. “All day I was thinking about all the little moments in my golf journey out and tried to use them as a guide throughout today’s round.”

Starting the day two shots off the lead—held by 15-year-old Emily Chu, Elizabeth Tong, Selena Costabile, Liv Cheng and Tiana Cruz—Lee-Bentham made 11 birdies and two bogeys on the day, setting a new course record (that was set just hours earlier with Porvasnik’s 64.)

“To be honest, I got a lot of good bounces out there today,” Lee-Bentham said. “A lot of times when you get a bad bounce or two your mood gets down, but when you get a good bounce, your spirit stays up and allows you to keep playing good golf.”

With the win, she joins the likes of Brooke Henderson, Lorie Kane, Alena Sharp, Cathy Sherk, Gail Graham and Nancy Harvey as a winner of this historic event.

“There’s so many great names on this trophy and it’s so nice to add my name to it,” she said.

Porvasnik finished alone in second at -6, while Zhu rounded out the top three at -5. Ladies’ Golf Club of Toronto member Costabile was at -4 in fourth with Valerie Tanguay and Cheng rounding out the top five at -3.

The Ladies’ Golf Club of Toronto hosted the inaugural DCM PGA Women’s Championship in 1987, which was won by PGA of Canada Hall of Fame member Cathy Sherk. The club also hosted the event in 1999 (won by Lorie Kane), in 2007 (won by Salimah Mussani).

The PGA of Canada’s Women’s PGA Cup spot were handed out Thursday.

Taking place Oct. 22-26 at the Omni Barton Creek Resort  & Spa in Austin, Texas, PGA members from across the world come together in a team competition for this landmark event.

The five members representing the PGA of Canada at the event are determined by their performance at the DCM PGA Women’s Championship in 2018 and 2019. Furthermore, the low club professional at the championship in ’18 and ’19 receives an automatic spot on the team.

The team consists of:

The next PGA national championship takes place this August at Carleton Golf and Yacht Club for the PGA Seniors' Championship of Canada.