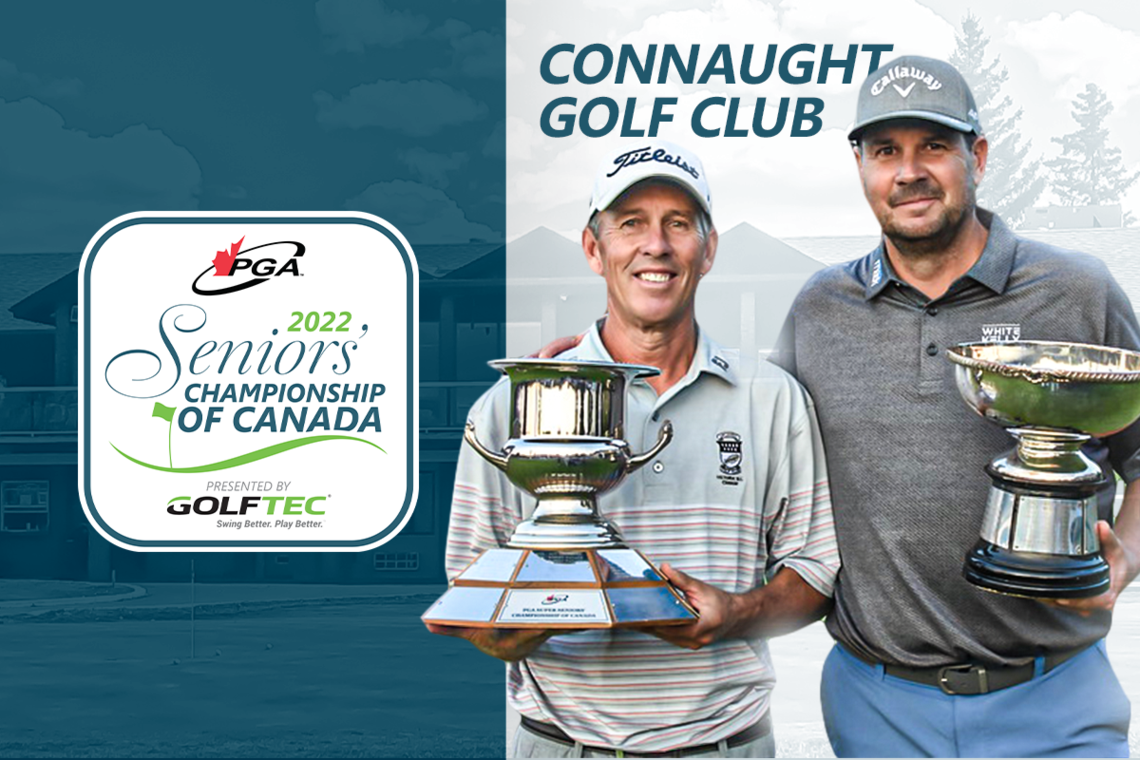 PGA Seniors' Championship of Canada presented by GOLFTEC set for this week at Connaught Golf Club in Medicine Hat, Alberta

Quick Facts:  Field Size: 43 players (16 players in Super Seniors Division) (Super Seniors Division includes players 60-years of age and older. Super Seniors competition concludes after 36-holes, but players will continue to compete for Seniors’ title on Friday).  Course Details: Par 72/6698 yards 2021 Seniors’ PGA Champion presented by GOLFTEC: Dennis Hendershott  2021 Super Seniors’ PGA Champion presented by GOLFTEC: Jim Rutledge Purse: $26,500 ($7,000 first place) Super Seniors Purse: $3,500 ($1,000 first place) Format: 54-hole individual stroke play  Tee Times: 8AM - 10:30 AM MT  Schedule of Events, Pairings and Full Purse Breakdown If this week’s PGA Seniors’ Championship of Canada presented by GOLFTEC is anything like what unfolded in Quebec in 2021, golf fans in Medicine Hat, Alberta that head to Connaught Golf Club this Wednesday to Friday are in for a treat.  Just over 12-months ago, Dennis Hendershott made an epic final-round run at the 2021 PGA Seniors’ Championship of Canada, making birdie on each of his final four holes of the tournament to win by one stroke.  This year, 43 of the top senior professionals in Canada are set to compete at the par-72 Connaught Golf Club, where conditions are spectacular – which we expect the scoring to be as well.   “It is incredible to see how excited the Medicine Hat community is to have this event in the city,” said PGA of Canada Managing Director of Championships Akash Patel. “The golf-course staff has been fantastic to work with and the layout itself will be a great test of golf for some of the most well-respected professionals in the industry. “It is fantastic that we now have GOLFTEC as the presenting sponsor of the event. The work they do to provide employment opportunities for PGA of Canada professionals is terrific for the industry as the sport continues to grow at an unprecedented rate in Canada.”  In addition to sponsoring the Seniors’ PGA Championship of Canada, GOLFTEC also launched a ‘Pass the PAT’ program in partnership with the PGA of Canada that has helped multiple aspiring professionals pass the Playing Ability Test. For more information, click here. “There are a ton of synergies between GOLFTEC and the PGA of Canada,” said GOLFTEC Canada COO and Vice President Dean Larsen. “It’s important for us to give back. With all the technology and everything we do, none of it matters if we don’t have PGA of Canada members, so we’re always looking for opportunities to give back and give them a place to play and make sure they have sponsors for events so that they can keep competing.”  Out of all the competitors this week, none are more decorated than Jim Rutledge, who has won this event six times. While the competition is always at the front of mind, Rutledge notes part of the thrill coming to the event is to connect with fellow professionals from across Canada. “I always enjoy playing this event and seeing my old buddies I haven’t seen for a year or even longer,” said the Victoria, BC native. “Today I’m playing with Donnie Graham, Scott Knapp and Phil Jonas, and we haven’t had a chance to catch up in a long time.”  Here are a few players to keep your eye on this week in Medicine Hat:  Players to Watch Jim Rutledge  As mentioned, Rutledge has won this event on six separate occasions, and last year claimed the super senior prize as well. His game is in top form, having just finished as the runner-up to Wes Heffernan at the BetRegal PGA Championship of Canada at Beacon Hall Golf Club. Rutledge and Heffernan were also the only two players to finish each round even par or better this past June.  Keir Smith  The National Golf Club pro knows how to put together a round. In 2021 Smith finished T6 at the Head Professional Championship of Canada, T4 at the PGA Seniors’ Championship presented by GOLFTEC and T21 at the BetRegal PGA Championship of Canada.  Kent Fukushima   The Calgary-based pro is looking to build off his 2021 T4 finish at the Seniors’ Championship of Canada. Fukushima, who is a professional at Redwood Meadows, was a Canadian Tour veteran and is now in his second year of eligibility for the PGA Seniors’ Championship of Canada presented by GOLFTEC.    Marc Hurtubise  Hurtubise gave his home-town faithful a lot to cheer about when his home club of Le Parcours du Vieux Village hosted the Seniors Championship of Canada last year, finishing in a tie for fourth, shooting 68 in the final round. They’ll be watching closely as their pro makes the trek west this week. Past Champions: 2021    Dennis Hendershott, ON  2020    No Championship     2019    Jim Rutledge, BC 2018    Serge Thivierge, QC    2017    Jim Rutledge, BC    2016    Claude Grenier, Austria  2015    Jim Rutledge, BC   2014    Remi Bouchard, QC    2013    Jim Rutledge, BC 2012    Jim Rutledge, BC   2011    Ken Tarling, ON    2010    Jim Rutledge, BC    2009    Ray Stewart, BC    2008    Yvan Beauchemin, QC    2007    Dave Barr, BC  2006    Graham Gunn, ON2005    Hocan Olsson, QC2004    Adam Brown, ON  2003    Doug Warner, ON2002    Gar Hamilton, ON2001    Bob Panasik, ON2000    Al Balding, ON

ABOUT GOLFTEC: Since 1995, GOLFTEC’s mission has remained the same—to help people play better golf. The GOLFTEC experience is designed for golfers of all ages and abilities to work with an expert Coach to build a game improvement plan customized to their specific needs and goals. GOLFTEC’s cutting edge training systems, including new OptiMotion, gives our Students and Coaches instant  data-driven feedback. With millions of lessons given and more than 220 locations across the world, GOLFTEC is a perfect fit for PGA Members wanting to showcase their coaching skills and love of our great game.