(Acton, ON) – It was announced today that the PGA Head Professional Championship of Canada presented by Callaway Golf and with support from Golf Away Tours and G&G Golf Company has a date finalized on Canadian soil, as the association looks forward to hosting the top Head Professionals, Executive Professionals, Head Teaching Professionals and Master Professionals in the country at Lookout Point Country Club in Fonthill, Ontario.

The official practice round is scheduled for October 25, while the three-round competition will run from October 26-28.

“We are so pleased to round out our National Championship schedule at such a tremendous venue in Lookout Point Country Club,” said PGA of Canada president Teejay Alderdice. “I’d like to thank the staff at Lookout Point for offering their facility to us for the week, as well as Callaway Golf for being such a tremendous partner of the association.”

Lookout Point Country Club is located centrally on a spectacular piece of property on the Niagara Peninsula and is surrounded by mature trees at the top of the Niagara Escarpment. Just 10-miles away from the world-famous Niagara Falls, its clubhouse offers panoramic views of the surrounding terrain and distant Niagara Falls skyline.

Tipping out at 6702 yards, the par-72 course is consistently rated within the top-100 courses in Canada by SCOREGolf Designed by Walter Travis in 1921, the course welcomed golfers for the first time in June of 1922 as the PGA of Canada’s Head Professional Championship will immediately proceed the club’s centennial year.

Lookout Point Country Club most recently hosted PGA of Canada professionals in 2013 when Jim Rutledge claimed his third of six PGA of Canada Senior Championships in a playoff over Rod Spittle at 7-under par. The club also hosted the inaugural RBC PGA Scramble National Championship in 2016.

“We are thrilled to once again be a part of one of Canada’s most storied National Championships,” said Bruce Carroll, General Manager Canada of Callaway Golf. “After a one-year hiatus due to the pandemic, we are so excited to once again be involved with the PGA of Canada and have the opportunity to host some of the best players in the country at such an incredible facility.”

In recent years, the championship has been played south of the border in the winter months, but due to uncertainties regarding travel restrictions, the association was able to finalize a fall date and return to a Canadian venue for the first time since Brett Burgeson won the event in 2003 at Club de Golf de l’Île de Montréal in Montréal, QC.

For more information and to register for the PGA of Canada Head Professional Championship of Canada presented by Callaway Golf, click here. 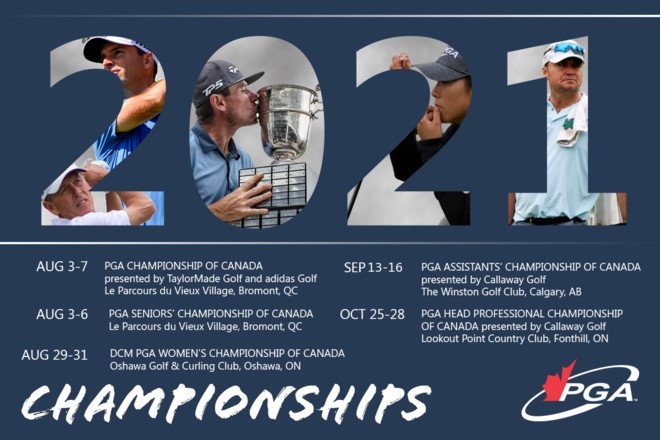 In addition to competing for ranking points, purses and championship titles, the PGA of Canada is excited to offer even more to participants this year thanks to our National Partners.

In addition to a “NoSweat Hardest Hole of the Day”, where players can win prizes by conquering a set hole each round, NoSweat and LivRelief will be activating at each event to offer participants access to product and other exciting opportunities.