The natural path for Mandeo Singh Pathania would have been to join the Indian Army and serve the country like his war-hero father. However, at just 13-years old, the Indian-born Pathania decided to take a left instead of a right – which has led to a record-setting golf career.

Mandeo's father, Col. Ravi Pathania, fought in the 1971 Indo-Pak war. The war-hero was a part of the infantry, fighting on the frontlines in constant danger. In 1971, Col. Ravi Pathania was standing atop a tank when a bomb exploded nearby. The news came to Pathania’s family that his father had been killed. However, the Pathania family's worst nightmare turned into a miracle when his father reappeared very much alive. While the bomb took three fingers from his left hand, he survived.

For a Canadian family, a story like this would be considered rare. For Pathania’s family, friends, and neighbors, this was part of everyday life. Growing up as an army child, Pathania became well acquainted to hearing news of his friend's father's not making it home. Many soldiers in the 1971 Indo-Pak war were not as lucky as Mandeo’s father. Although traumatic, Pathania says growing up in this high-pressure environment has only helped him become a better golfer.

Pathania said complaining was not an option in his family. A bad round was not something he would worry his father with. “We grew up in an environment where if there's food on your table, if there's a roof over you, and you're not being shot in the head, you're fine,” he said. 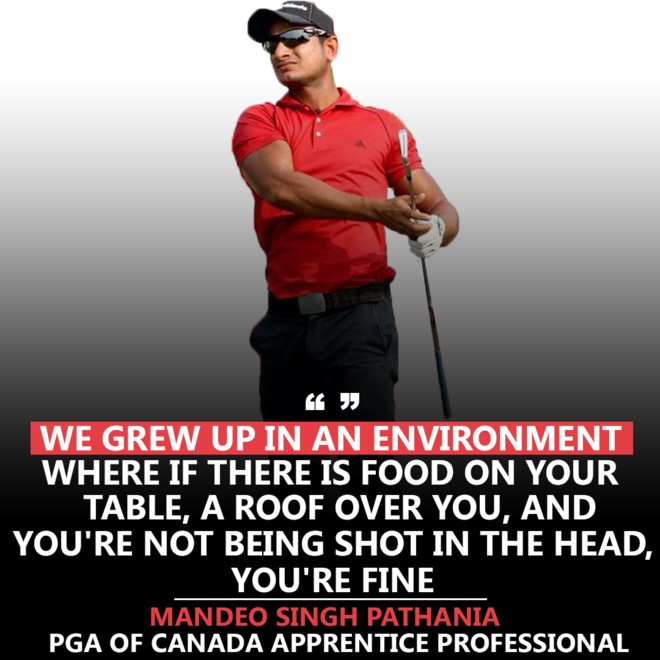 Pathania’s mental strength is evident when you talk with him. He says that the game of golf can not be played with only physical strength, the mental strength is just as important. Staying calm and confident has set him apart from the average player. The golfer says, “mentally in my mind if I'm paired up with Rory McIlroy right now, I will not get bogged down.”

Pathania says that it is no coincidence we are seeing many players from Asia on the PGA and LPGA Tours. Countries where army enrollment is mandatory bring a strong discipline factor within families. Pathania compares how the public demeanor in Canada is soft and generous whereas in India you often find the opposite.

“Where I grew up it was aggressive. Growing up in an aggressive environment gave me a mentality that you need in any sport, it gave me good control of my mind,” says Pathania.

Pathania grew up all over India, moving every couple of years for his father’s career. Every base he called home, he played sports. Every sport that was offered to him he took part in, and he played them all well. He went to nationals in cricket, earned records in swimming, soccer, tennis, and shooting. But it was when he took up golf that he realized he could make a career in sports.

When Pathania was growing up, golf in India was reserved for two groups of people, the ultra-rich and the army. Mandeo falls into the latter category. With deep British roots, golf was a major sport within the Indian army. The army owned the courses Pathania began to play at 12-years old, and by the time he was 13, he had won every club championship. By 2005, Pathania turned professional, joining the Professional Golf Tour of India (PGTI) and earning the Rookie of the Year award.

At this time, Pathania joined the renowned Jaypee Greens club. This is where he worked on his game and perfected the ‘grip it, and rip it,’ swing he is known for today. Pathania had made a name for himself in the golf community within Asia. He joined the Asian Tour in 2008 and won his first event in Mumbai in 2010. After finding success on home soil, he set his sights on North America.

For years, the hard-hitter would travel to the United States for 3-month stints. He trained under some of the greats like Jim McLean and Bob Toski and dedicating himself to trying to earn a spot on the PGA TOUR. He narrowly missed out several times and decided that he needed a more sustainable plan to continue working in the golf industry. That’s when he decided to share his knowledge of the game and became a coach.

In a very fitting series of events, the young golfer met his Canadian wife on a golf course. The chance encounter that eventually led him north.

Pathania arrived in Canada in April of 2015. He said it was cold, windy and the grass here was different than in India. But the conditions didn’t seem to phase him much as he went on to win the very first tournament he played on Canadian soil.

Currently, Pathania is a PGA of Canada apprentice professional and golf pro at Glen Abbey in Oakville, Ont. He was surprised to have found such a passion for coaching. Bringing the same philosophy, he has for himself, ‘keep it simple but take it seriously,” to his students.

Pathania says he has had a very fulfilling career as a player but is now happy to be able to coach the next generation of golfers in Canada.