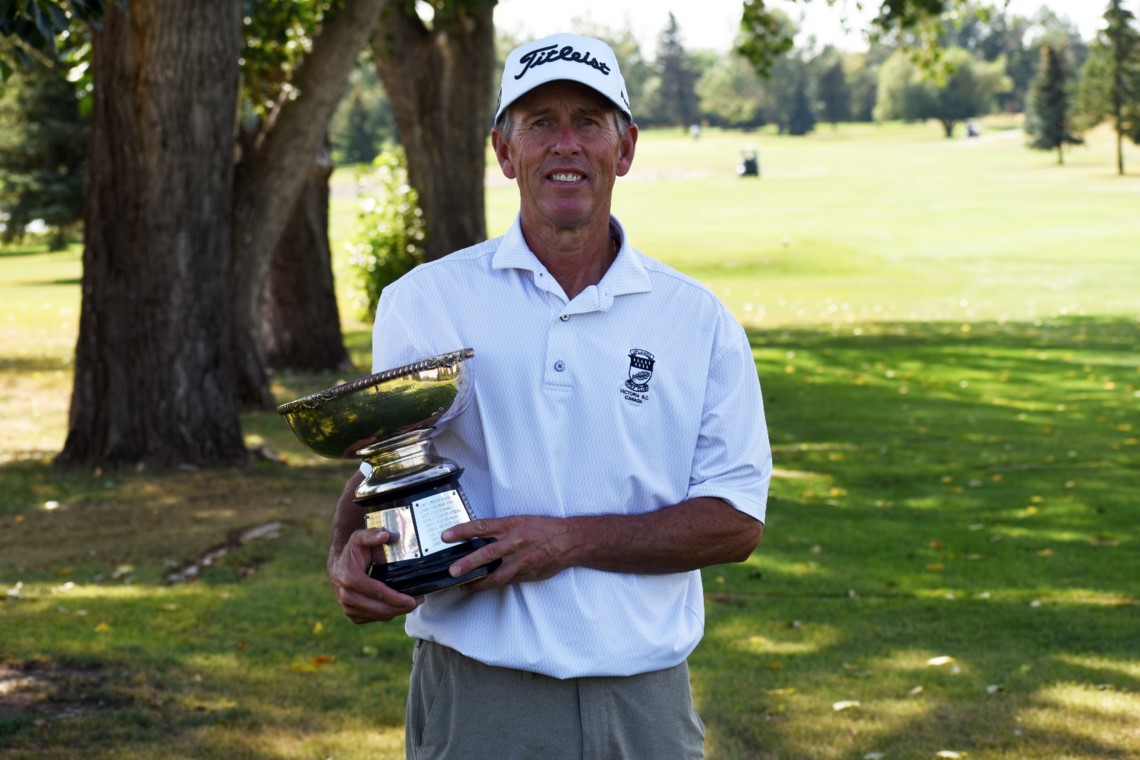 (Medicine Hat, AB) – A sure-fire way to win a golf tournament when holding the lead is to fire the round of the day – and that is exactly what Jim Rutledge managed to do on his 63rd birthday at the PGA Seniors’ Championship of Canada presented by GOLFTEC, firing a 66 to win the event for the seventh time by a four-stroke margin.

“My goal today was to get out of the gate quick and I managed to birdie one and two and six and seven, so that helped me get through the front nine,” said Rutledge, who was given a birthday cake on behalf of the Connaught Golf Club membership in addition to his trophy during the awards ceremony. “Overall, I’m very happy with the way I played.”

Though the Victoria, BC native gave a stroke back on the par-3 11th, he rebounded quickly with three birdies in a row from 14-16 to give him a seven-stroke cushion, the largest the margin got through the entire week, which allowed him to cruise through the final three holes to pick up the title.

“I drove the ball really, really well this week,” said Rutledge, who fired 64 and 70 the two rounds prior to Friday. “It’s a golf course that is fairly narrow and you can get in some trouble, but I kept it in the middle and set myself up for a lot of birdies.”

The win comes a day after Rutledge claimed his second-consecutive Super Seniors title and marked the first time he was able to claim both in the same year. In total, Rutledge’s seven wins at the Seniors’ Championship of Canada puts him just one behind the all-time record of eight held by Moe Norman.

“We played a lot of golf together over the years,” said Rutledge, who mentioned that he was introduced to the Canadian legend you’ll often hear referred to as the ‘greatest ball striker of all time’ by John Morgan in 1978. “I played some practice rounds with him and tournament rounds with him and definitely learned a lot.”

The comradery at the Seniors’ Championship is perhaps unmatched at any other event. One of Rutledge’s only errant shots came on the 18th when his tee shot took a kick off a bank and found the water.

His friend and playing partner, Phil Jonas, seemed more concerned about making sure there was nobody who had finished that had closed the gap than thinking about there being an outside chance of a big final-hole swing.

“We played together countless times, seven or eight just in the final round, so we always have fun together and I always look forward to playing with him,” said Rutledge, who still managed to save par after taking a drop on the 72nd hole.

Jonas made a clutch birdie putt on the penultimate hole to fold into a tie for second place alongside Scott Allred. Meanwhile, Calgary’s Kent Fukushima and PGA of Canada President Gord Percy rounded out the top five

As far as the feeling of the tournament itself and Connaught Golf Club, Rutledge could not have been more complimentary.

“To the staff and the Superintendent Justin (Olansky) and his crew who took care of the golf course, that was absolutely fabulous,” said Rutledge during his awards speech. “I know what it takes to make a golf course tournament ready, and you all did a great job.”

2022 is the first year with GOLFTEC on board as the presenting sponsor. GOLFTEC currently employs roughly 75 PGA of Canada members, and COO and Vice President Dean Larsen was on site all week greeting players as the tournament’s starter on the first tee.

The next PGA of Canada National Championship on the docket is the PGA Assistants’ Championship of Canada presented by Callaway Golf, slated for September 11-14 at The Algonquin Resort in St. Andrews, New Brunswick.