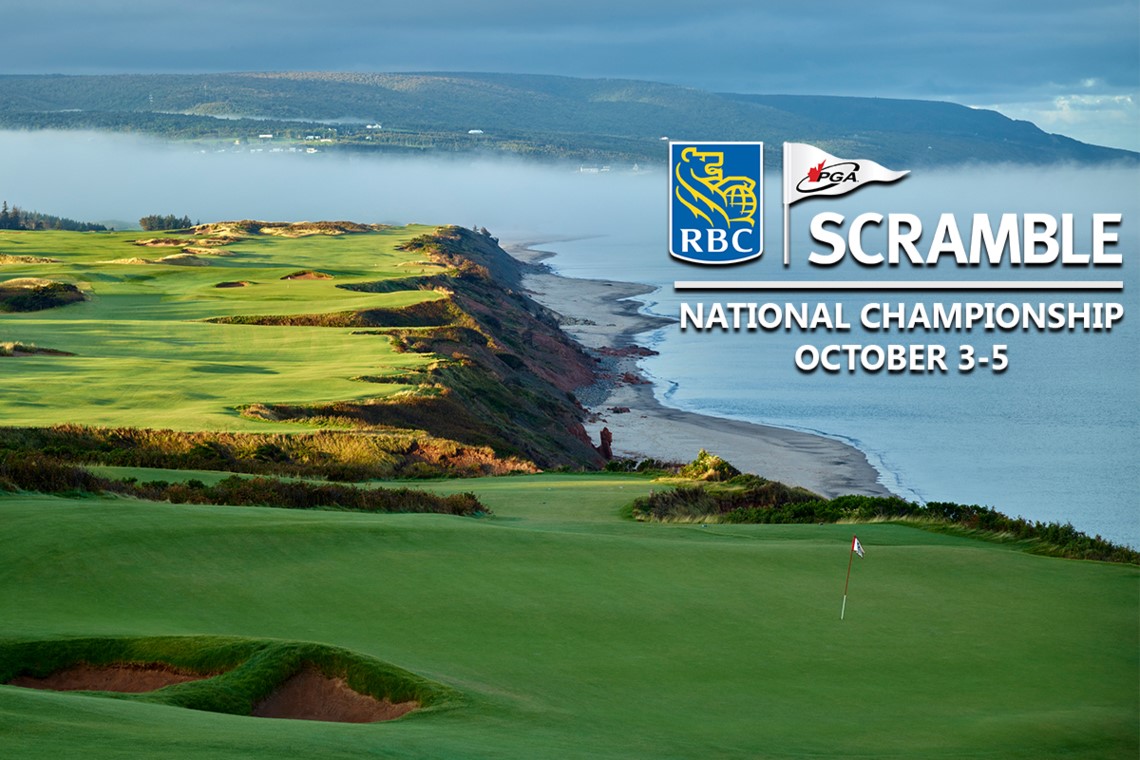 The trip of a lifetime is back.

80 amateurs from across the country who managed to claw their way through local and regional qualifiers are joined by 20 PGA of Canada Professionals, who comprise the 20 teams looking to claim the title of RBC PGA Scramble National Champions.

For these 20 teams, qualifying was quite the journey as a record-setting number of over 12,500 golfers competed in the RBC PGA Scramble this year. The journey finally comes to a peak October 3-5 as players set foot on Cabot Cape Breton in Inverness, Nova Scotia for the 54-hole championship at the Cabot Cliffs and Cabot Links courses.

“We are so thrilled, here at Cabot Cape Breton, to once again host the RBC PGA Scramble,” said Cabot Cape Breton General Manager Andrew Alkenbrack. “We have been looking forward to this day for some time now and are excited to welcome everyone back from across the country. There is nothing quite like seeing players reactions when they arrive on site for the first time. This is going to be a very exciting week for everyone involved.”

In 2020, Cabot Cliffs was ranked the No. 1 course in Canada by ScoreGolf while Cabot Links was ranked No. 5.

Located in Inverness, N.S., Cabot Links is Canada’s first and only authentic links golf resort. Nestled between the Atlantic Ocean and the picturesque town of Inverness, the Cabot Links course represents a dramatic departure from the typical golf excursion. With six holes playing directly alongside the water and every hole offering an ocean view, Cabot Links is where traditional links-land golf comes to life against the spectacular Nova Scotia landscape.

The Cabot Cliffs course, designed by the decorated team of Bill Coore and Ben Crenshaw, is exquisitely carved out of the breathtaking Cape Breton landscape. With postcard-worthy panoramas vying for your attention and every hole calling out to the sea, it is links-land golf at its best.

“To play those Cabot courses, it’s a dream come true. They’re about as good as it gets for golf in Canada,” said Ryan Secord, who qualified for the National Championship alongside his father, Kelly, as well as another father/son duo in Kyle and Don Scott. “None of us have been out to Cabot before, I've never been east of Quebec City, so we keep pulling up pictures and videos from their website, we’re really pumped about it.”

The Secord’s and Scott’s, who are joined by PGA of Canada member Matt Lorenz at the Championship, originally qualified for the Regional Finals from the Bridges Golf Course in Starbuck, Manitoba.

While the qualifiers were relatively smooth sailing for the Bridges players, who qualified from the Elmhurst Country Club Regional Final, the same can’t quite be said for the team from Langara Golf Course. A fender-bender prior to the B.C. West Regional Final almost squashed their Cabot hopes before they could begin.

“Two teammates and I ended up getting rear ended on the Sea to Sky Highway, so it was a pretty crazy day and we arrived just in time and didn’t get a warmup,” said Kevin Sandher. “Luckily my car was drivable, and we gave ourselves lots of time in the morning, but we realized we had to get there quick after we ensured everybody was okay.”

Sandher’s team, consisting of a group of friends who, like many across the country, picked up the game during the pandemic as it was the only way they were able to see each other, didn’t let the crazy morning affect their play as they won by two strokes.

Other anecdotes from teams ahead of the National Finals includes one team who needed birdie on the final hole of the Regional Qualifier to qualify, and hit their approach shot to 2-feet just as the drums dropped in In the Air Tonight by Phil Collins from the team’s speaker – you know what I’m talking about.

One other team noted that they had scheduled multiple meet ups prior to the event at an indoor simulator to practice on the Cabot Links and Cabot Cliffs courses – we’re willing to bet their experience on the East Coast is going to one-up the time spent in the simulator.

The RBC PGA Scramble promises to be a golf trip of a lifetime and includes numerous receptions, an authentic east coast kitchen party, a night golf experience under stadium lighting on Cabot’s newly opened par-3 course called “The Nest”, prizing, meals, activations and much more.

Players and tournament staff are following all government mandates regarding COVID-19 to ensure the safety of everybody on site, including requiring full vaccinations from all participants.

MacDonald had quite the 2020-2021 season on the Korn Ferry Tour. Heading into the season with conditional status, four top-10 finishes led to MacDonald finishing 60th on the money list, granting him full status in 2022 as he chases a PGA TOUR card.

Meanwhile, Du Toit is fresh off what may be the biggest win of his career, winning the ATB Financial Classic on the Mackenzie Tour – PGA TOUR Canada in his hometown of Calgary, Alberta, just a matter of weeks ago.

For those not playing in the RBC PGA Scramble National Final, you can still take part in all the action throughout the week at Cabot Cape Breton on our social media pages. Follow our Twitter, Instagram and Facebook pages to stay up to date throughout what promises to be a very special and memorable week in Nova Scotia.