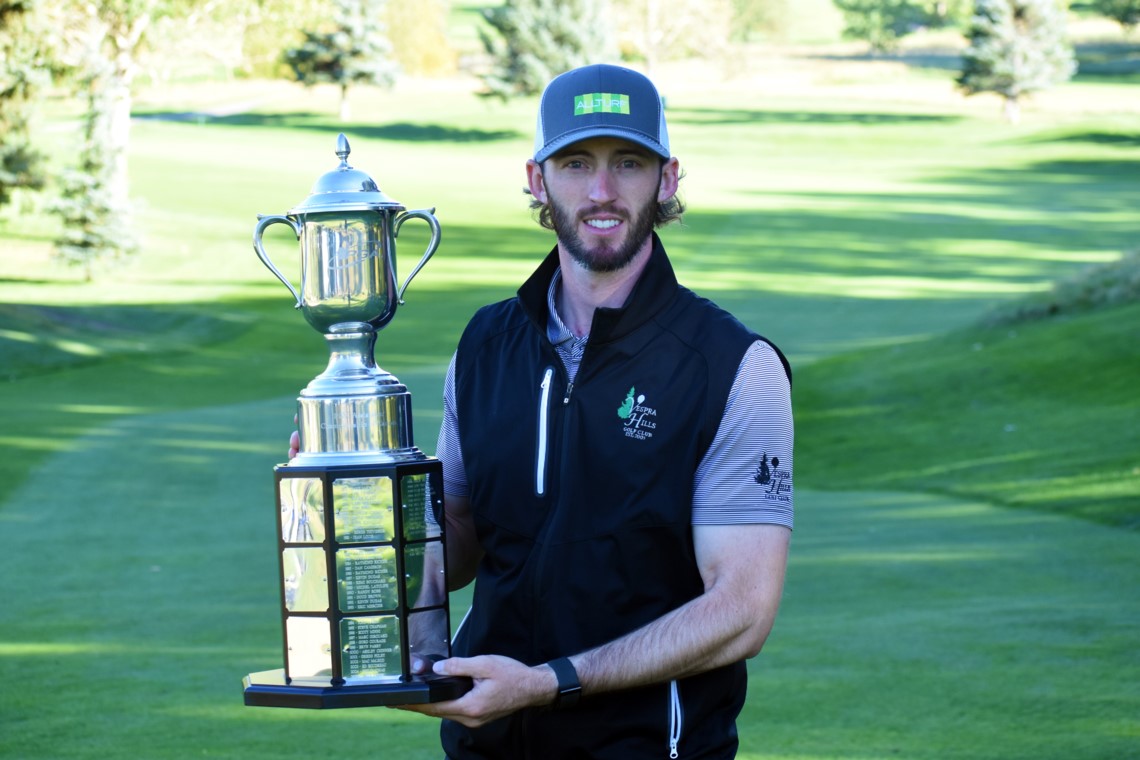 (CALGARY, AB) – Entering the final round of the PGA Assistants’ Championship of Canada presented by Callaway Golf tied for the lead at 7-under alongside Yohann Benson, Barrie, Ontario’s Branson Ferrier seized his opportunity, firing a final-round 68 to win by two strokes over Kevin Stinson.

For results of the PGA Assistants’ Championship of Canada, click here.

It was a cold and rainy morning at The Winston Golf Club, with the thermometer reading 6-degrees Celsius (but feeling more like freezing). 11 players entered the day within three strokes of the lead, trying to gain ground on Ferrier and Benson.

On the third hole of the day, Ferrier made a 12-foot putt for eagle and didn’t relinquish the lead the rest of the day as he claimed his third-career professional victory.

“I hit a really good shot into number three and as soon as I got to the ball, I saw it going in,” said the Vespra Hills Golf Club Apprentice Professional. “That felt good to get going early. There were quite a few guys close behind myself and Yohann (Benson) early on, so I had to get out of the gate hot and mentally that helped me out early.”

Graduating from Alabama State University in 2017, Ferrier noted that he became a sponsored member at Vespra Hills Golf Club in 2018 before joining the turf staff last year. This year, he has stepped into a role in the golf shop.

“They’ve been unbelievable,” said Ferrier with a smile. “They’ve taken me under their wing and now I work in the golf shop helping our GM Dave Caldwell and our Head Pro Chris McNair, helping manage the place, running some events and really getting to take a hold of the junior program. They were gracious enough to let me come out here for the week and I can’t thank them enough.”

Though Ferrier made bogey on hole 4 after the eagle, he followed it up with three consecutive birdies and didn’t make a single bogey on the back nine. As soon as he went pin-hunting on the difficult 17th, it was all but over.

“I’ve been in this position two times before,” said Ferrier, who won on the Great Lakes Tour in 2017 and the East Coast Pro Tour in 2019. “I was calmer than I was in the other two times, so that was comforting, knowing I converted both other times I was in a final group.”

With the win, Ferrier takes home $9000, as well as some important RBC Player Ranking Points. After finishing 30th earlier this season at the BetRegal PGA Championship of Canada, the win should catapult Ferrier near the top of the standings.

Ferrier noted after the event the crucial role Callaway and all the PGA of Canada’s sponsors play when it comes to tournament golf.

“If we were only playing for the money we put into a tournament like this, nobody would come because it simply wouldn’t be worth the travel,” said the Alabama State 2016 Male Athlete of the Year. “To have Callaway’s support to help with the purse and to run an event like this, it’s absolutely crucial and the only way events like this can happen, so I’m very grateful for them.”

Meanwhile, Kevin Stinson managed his second runner-up performance of the year, firing a final-round 68 to place two-strokes ahead of a group of four players at 7-under.

The NoSweat Hardest Hole of the Day on Tuesday was the 195-yard par-3 11th hole. Nine players made birdie on the hole and after a random draw, Tyler LeBouthillier claims the $125 prize courtesy of NoSweat.

In addition to NoSweat’s presence at the championship, LivRelief, the Official Pain Relief Cream of the PGA of Canada, has given free full-sized product to all players and Focus Golf Target set up one of their professional targets on the 17th hole during the practice round.

Like at the BetRegal PGA Championship of Canada and DCM PGA Women’s Championship, each player received three attempts to land as many balls inside the target as possible. Craig Titterington made two of his three shots and was awarded the $250 prize.