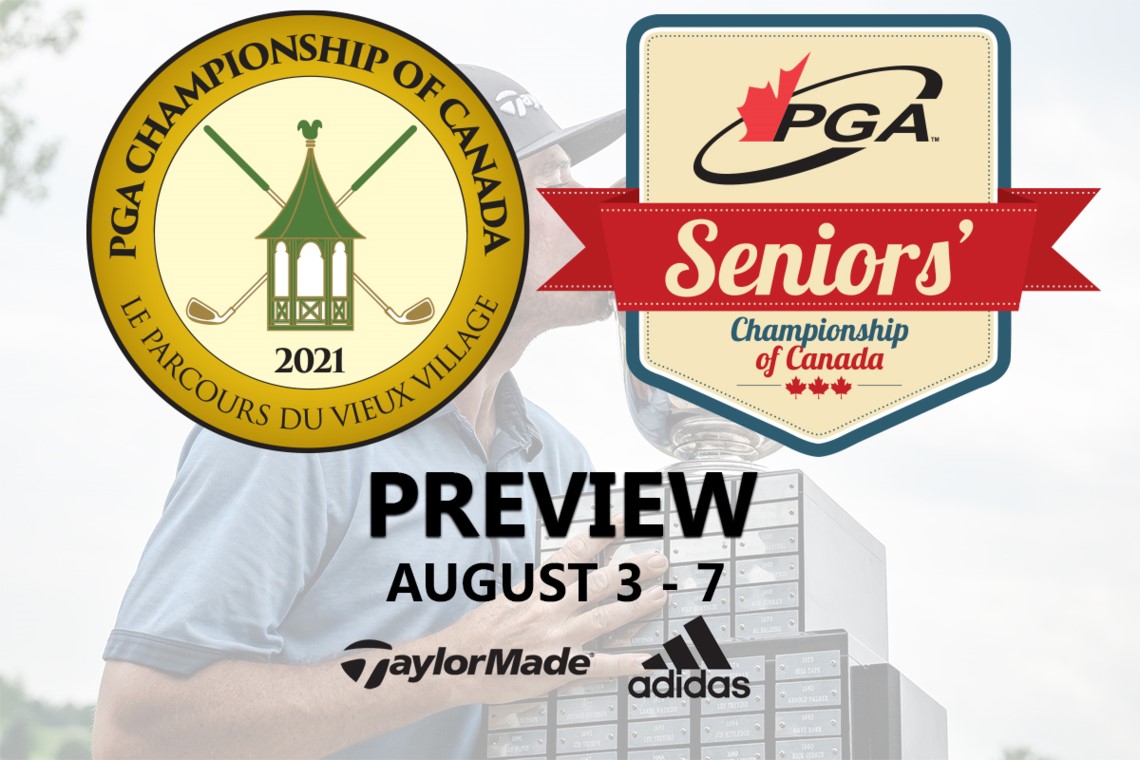 93 of the association’s best players look to capture the PGA Championship of Canada presented by TaylorMade Golf and adidas Golf while 60 seniors will compete for the title of PGA Seniors’ Champion.

Despite never having won the PGA Championship of Canada, Heffernan is as consistent as they come, which he proved when he won the 2019 PGA of Canada Assistants Championship at TPC Toronto by three strokes with scores of 66-67-64.

This list wouldn’t be complete without the champ from three years ago. With 2019’s champion Risdon not in the field, Bedard holds the most recent memories among competitors of hoisting the P.D. Ross Trophy – which he did after defeating Gordon Burns on the 18th hole at Credit Valley during the match-play portion of the event in 2018.

The 31-year-old can heat up on any given week and will be a local favourite competing in his home province. The biggest victory of Gilbert’s career so far came in 2013 when he claimed the Mackenzie Tour – PGA TOUR Canada’s Tour Championship in London, ON to finish the season 13th on the Order of Merit. He’s finished within the top 50 of the Mackenzie Tour’s money list three times in his career.

The South African former Euro-Tour pro is always a name to watch when he’s competing. McLean is coming into the tournament in peak form, fresh off a victory at the PGA of Ontario Zone Championship in mid-July. In addition to his Zone Championship victory earlier this year, McLean picked up a win on the Mackenzie Tour – PGA TOUR Canada (then Canadian Tour) in Windsor in 2012.

With so many talented players in the field this week, it’s hard to narrow the list down to five, but we’re finishing it off with this year’s Ontario Zone Championship runner-up, who won that same event in 2018.

All are also competing in PGA Championship

Can anybody take down Rut? A legend in the Canadian golf community, Rutledge’s name is often brought into conversation alongside other legends of the game such as George Knudson, Moe Norman and Stan Leonard. This is for good reason; in addition to winning the PGA Championship of Canada in 1984, Rutledge has won the PGA Seniors’ title six times, has six Canadian Tour victories to his name, a Nationwide Tour win and made the cut at The Open Championship in 1990.

The King. Any tournament he plays, you can expect to see his name near the top of the leaderboard. Don’t believe it? Refer to the 2015 PGA Championship of Canada at Cabot Links when he shook hands with Oliver Tubb on the 14th green to cement a 5&4 victory to claim the P.D. Ross Trophy.

In addition to his teaching pedigree - the British Columbia Golf Hall of Fame member was named the 2012 PGA of BC teacher of the year – Jonas is a 4-time PGA of BC Player of the Year and won the PGA of Canada Assistants’ Championship twice, in 2004 and 2006.

With a golf academy located right in Bromont, QC, Hurtubise is going to be a name plenty of locals are following as the week goes on. Hurtubise competed on the Canadian Tour from 2003 until 2009, the year he claimed the Greater Bangor Open.

2021 marks the 10-year anniversary of Tarling’s Senior Championship title at King’s Riding Golf Club in Ontario. His scores of 68-68-69 led to a two-stroke victory over Calgary’s Scott Allred. Can Tarling find that same magic this time around in Bromont?

For the full field and first-round tee times, CLICK HERE.

“After a year without any championships, our first two events back are full fields comprised of the highest ranked professionals competing for the PGA Championship of Canada presented by TaylorMade Golf and adidas Golf as well as the PGA Seniors’ Championship,” said PGA of Canada Championship Manager Rob Watson. “We have multiple past champions, the top seniors and a number of up-and-coming players from across the country in the field. These are sure to be first-rate championships that will produce worthy champions.”

Golf Club du Vieux Village is located 45-minutes outside of Montreal in the heart of Bromont. The 18-hole public course which many call “the hidden treasure of the Eastern Townships” is set to host the PGA Championship of Canada presented by TaylorMade Golf and adidas Golf, as well as the PGA Seniors’ Championship, for the first time.

Re-launched in 2011, the PGA Championship of Canada was contested strictly as a match play event thru 2014 with players from the four brackets—Stan Leonard, George Knudson, Al Balding and Moe Norman—looking to advance through the six rounds to capture the P.D. Ross Trophy. However, the 2015 championship at Cabot Links saw a format change, with 64 top-ranked players from the PGA of Canada Player Rankings presented by RBC playing two rounds of stroke play before moving onto a match play bracket. However, this year, the event is being played as a 72-hole stroke play event.

PGA of Canada Player Rankings presented by RBC points are also up for grabs at both events. The player who earns the most ranking points (in national and zone events) in 2021 will be awarded the Mike Weir Player of the Year crown at next year’s Awards Night.