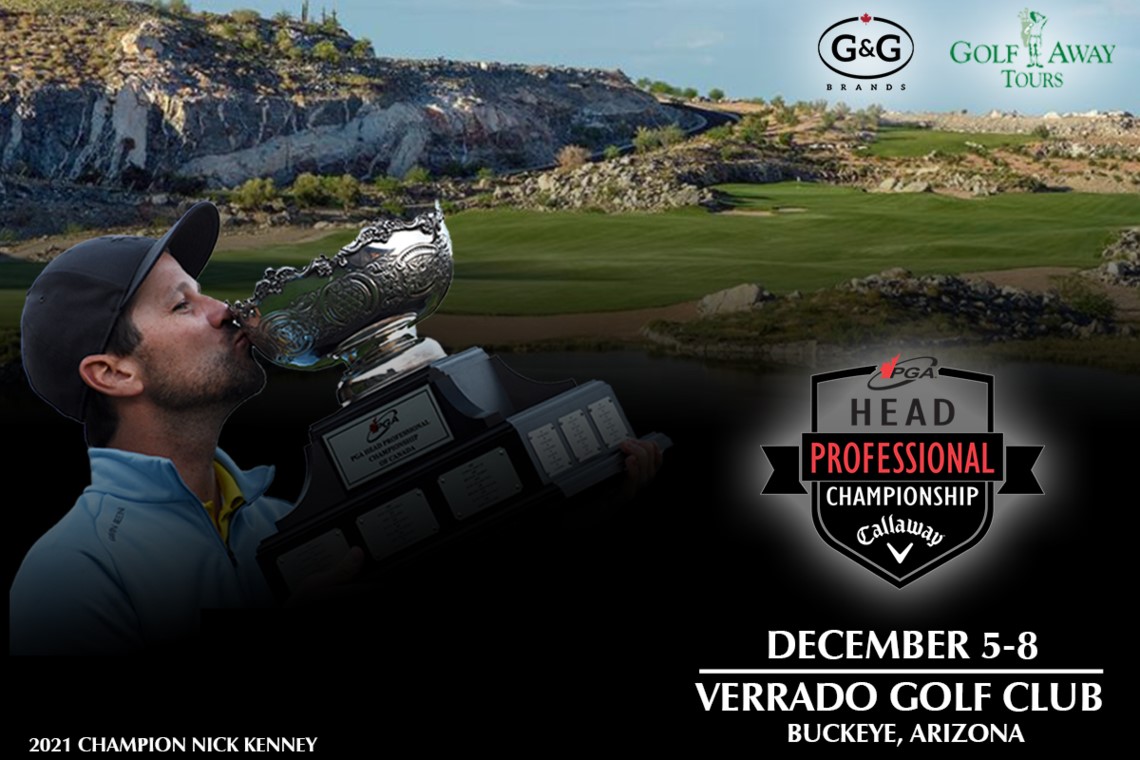 Last year’s event marked the first time since 2003 that the event was held in Canada, being played at Lookout Point Golf Club, just outside of Niagara Falls. Players this week are trading in last year’s crisp late Canadian Autumn for what looks to be a sun-filled four days in Phoenix alongside some of the most respected professionals in the industry.

Perched upon the foothills of the White Tank Mountains, the Victory Course at Verrado Golf Club makes a player feel on top of the world, not only enjoying views of the Founders course and clubhouse, but the entire western Phoenix valley below. The course previously held the PGA Head Professional Championship of Canada presented by Callaway Golf and supported by G&G Brands in 2015. On that occasion, though, player took to the Founder’s Course, the other track at the 36-hole facility.

The PGA Head Professional Championship of Canada presented by Callaway Golf has a list of champions that includes some of the most well-respected golf professionals in the country. The full list of past champions can be found here.

2015’s winner, Danny King, looks to find that same desert magic this week, as he leads off our five players to watch heading into the championship:

King’s 2015 victory at Verrado Golf Club made PGA of Canada history. The victory was his third of the year, after first capturing the BetRegal PGA Championship of Canada at Cabot Links and then the PGA of Canada Team Championship earlier that year. To this day, nobody other than King has won three PGA of Canada National Championships in the same season. In addition to his 2015 victory, he also won the event in both 2005 and 2006. While seven years have passed since King’s monumental victory, his game has remained sharp. The Head Teaching Professional at the Performance Academy at Magna is currently the sixth ranked player on the PGA Rankings after a runner-up finish at this event last year and a third-place finish at the PGA of Ontario Head Professional Championship earlier this season.

“I think, by far, this is the biggest win of my career so far,” said Kenney after claiming the 2021 PGA Head Professional Championship of Canada presented by Callaway Golf and Supported by G&G Brands. The National Golf Club of Canada Head Teaching Pro was the only player to break 70 in both rounds of the rain-shortened championship, firing 69-68 to win by four. No stranger to a big stage, Kenney was a PGA TOUR Canada member in 2010 prior to becoming a PGA of Canada member in 2013. Kenney looks to be the first player to win the event in consecutive seasons since the aforementioned King in 2005-2006.

After claiming the PGA of Manitoba Championship in 2021, North was well in the mix at this event a few months later, trailing by just one stroke to Kenney after the opening round to fold into the final pairing. Though he finished in fifth, the Carman Golf Club Head Professional fared even better at the Manitoba Head Professional Championship this past summer, finishing as the runner up. In addition to competing for the overall tournament crown, North is seeking low club professional honours, which brings with it a $500 bonus.

The last time this event was held south of the border, Burns found himself on top, shooting 62-65-68 to win by seven strokes. In addition to the tournament crown, Burns was also named the PGA of Ontario Player of the Year for the 2019 season. The former Canadian Tour member from 1999-2003 is the top player on the PGA Player Rankings competing this week, in the fourth spot, thanks to a pair of third-place finishes this season at the BetRegal PGA Championship of Canada and the PGA of Ontario Zone Championship.

Jonas is fresh off a runner-up finish at this year’s Seniors Championship of Canada presented by GOLFTEC, where he was only bested by Jim Rutledge’s monumental performance. Last summer, though, Jonas couldn’t be beat on the Saskatchewan circuit, claiming both the Head Pro Championship and Zone Championship. In addition, Jonas was the runner-up to Gord Burns at the 2019 PGA of Canada Head Professional Championship presented by Callaway Golf and supported by G&G Brands in Arizona.