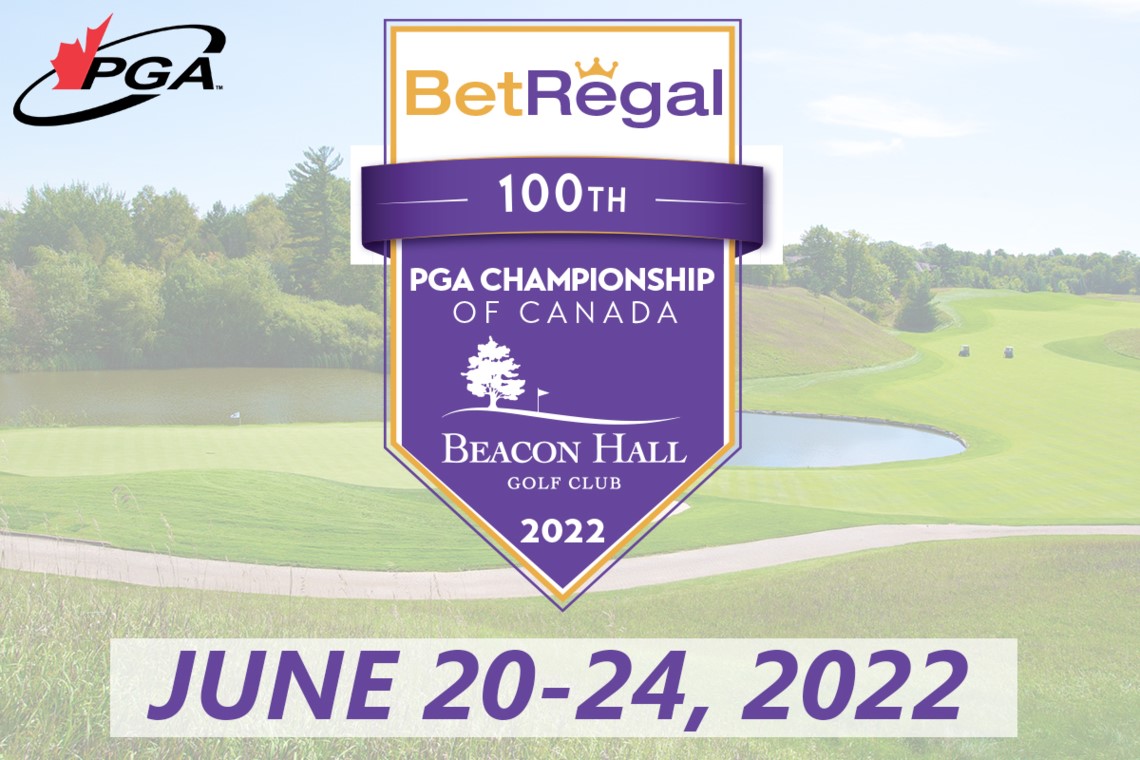 The Aurora, Ontario private club to host a national championship for first time since club’s inception in 1988.

(Acton, ON) - In celebration of the historic BetRegal PGA Championship of Canada’s 100th playing, it was announced today that Beacon Hall Golf Club, one of the most prestigious private golf clubs in the country, will host 100 of the PGA of Canada’s top professionals June 20-24, 2022.

Located just outside of Toronto in Aurora, Ontario, Beacon Hall Golf Club, originally designed by Bob Cupp, opened to members in 1988 and has since been a mainstay atop the Score Golf Top 100 rankings, peaking at No. 5 in the country in 2006, and most recently being ranked as the No. 11 club in the country in the 2020 rankings.

“We want to make the 100th playing of the BetRegal PGA Championship of Canada a special one, and finding an appropriate venue was our priority,” said PGA of Canada president Teejay Alderdice. “We are excited to host our championship at a venue of this calibre. The planning for the celebration of the great history and past champions of this event has already started.”

The par-72 layout tips out at 7,148 yards, and in its relatively short history, has seen little outside play. In 1998 for its 10th anniversary, the club hosted the Canadian Open President’s Invitational that attracted the likes of Billy Mayfair, Vijay Singh, and Tom Lehman, among other PGA TOUR players. In addition, in 2007 Beacon Hall hosted the Copas de las Americas, where PGA TOUR star Webb Simpson led Team USA to victory.

“We are honoured to be the host venue of such a historic championship and this very special edition of the 100th playing of it,” said Beacon Hall Club President Stephen Boehmer. “Our membership is so proud of our facility and we look forward to opening our doors and welcoming PGA of Canada Professionals from across the country to experience what our members get to experience every day”.

Last year, at the 2021 BetRegal PGA Championship of Canada, Calgary, AB’s Riley Fleming set a tournament record, shooting 25-under par over four days at Parcours du Vieux Village to claim what he called “the biggest win of his career.” "We're thrilled that Beacon Hall, one of the most sought after clubs in the country, will be hosting one of the biggest events in Canadian golf, the BetRegal PGA Championship of Canada,” said Mike Mirtl, CEO of BetRegal. “On behalf of the entire BetRegal team, we wish all of the PGA of Canada professionals who participate the best of luck and we can't wait to see you in Aurora next June."

More information about the event and the various activations that will take place to celebrate the 100th playing of the tournament will be announced in the coming months including a championship Pro-Am, gala dinner and showcase of past champions.

About Beacon Hall Golf Club A Private Equity Club with only 260 shareholder members, Beacon Hall is a small membership by design. A very limited membership – open access to the first tee is a key part of our Mission which is to deliver a premier standard of excellence across all aspects of our membership experience. Consistently ranked as one of the top 100 courses outside the US, our Course is a Bob Cupp masterpiece.