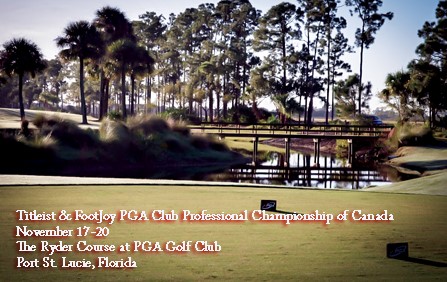 Two Tied at the Top

Two lefties from Quebec are tied for the lead after the first round of the Titleist & FootJoy PGA Club Professional Championship of Canada Monday at PGA Golf Club in Port St. Lucie, Fla.

Cacchione and Hurtubise, who leads the lead heading into Tuesday's second round, had similar clean rounds, each making six birdies and one lone bogey.

"I really didn't make any mistakes today," Cacchione admitted after his first round. "It was what you could call an old-fashioned round with good putting and good ball striking."
"Of the 15 greens I hit today I was only outside of 20-feet twice," Hurtubise said. "But I honestly thought the scores would have been a little lower today-like a 65 or 66 would have been leading at the end of play," he says, adding, "then again, it's just the first day too and you don't want to make the mistake of shooting yourself out of the tournament."

Currently, 72 players are six-over or better with the cut of the top-70 (and ties) coming after Tuesday second round.

The $85,000 purse Titleist & FootJoy PGA Club Professional Championship of Canada takes place Nov. 17-20 at the PGA Golf Club's Ryder Course. The 90-player field will be cut to the low 70-players (and ties) after completion of the second round.