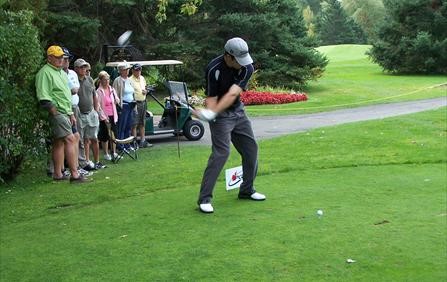 Three way tie after first round at CPGA Assistants’ Championship

STE-SOPHIE, QC (September 24, 2007) – Competition is heating up at Club de Golf Val des Lacs as local favourite Eric Couture of Ste-Sophie, Quebec, Jon Roy of Beaconsfield, Quebec and Jamie Kureluk of Calgary, Alberta have emerged as the first round leaders and low Assistant Professionals at the 2007 Titleist and FootJoy Canadian PGA Assistants’ Championship presented by Simmlands Insurance.
After playing under a clear sky and pleasant conditions, the three Assistants shot a three-under 68, and lead by one shot over past champion Phil Jonas of British Columbia, Mike Belbin of Alberta, and dual zone Ottawa/Quebec Member Chris Barber.

Host club Assistant Professional, Eric Couture carded a 68 with five birdies, and two bogeys. The 26 year old was the low qualifier for the Canadian Tour last year, and last week he qualified again for the tour, placing second in the qualifying tournament. When Couture became an Assistant Professional at Val des Lacs two years ago, he won all four events on the Ben Hogan Tour (Quebec Assistants’ tour), and was rookie of the year as well as player of the year. After battling some tough greens in the last week’s qualifier, Couture was looking forward to the familiar surroundings at his home club. “Today my driver was a little off, I really don’t think that I hit one fairway, but luckily my ball was still in play. The rest of my game was really good, I had about 26 putts and made a lot of up and downs. Playing at home is always good. I haven’t played for a National title much in my career so this is great”.

Couture is heading to Lakeland, Florida in a few weeks to attend PGA TOUR Q-School for the third time in attempt to receive his PGA Tour card. The first year that he attempted Q-School he was cut after the first stage, last year he was cut after the second stage, and so this year, he is hoping to make it through to all three stages.

Jon Roy, native of Montreal who now resides in Ontario, fired a 68 with three birdies and 15 par. Roy who played competitively through university and frequented the Great Lakes Tour is now working with Canadian PGA Member Henry Brunton teaching elite junior players across Canada. “The course conditions today were fantastic, I love the course. I just kept my drives in play and had a good day with my putter”. This is Roy’s second time playing in the Assistants’ Championship and he enjoys the opportunity to get away and compete. “This is a great tournament. For me, I’m not too concerned about the scores, I see it as a way to see old friends and enjoy a few days to play golf”. Roy feels that if he stays consistent tomorrow he will be able to produce a score much like he did today as long as he stays mentally committed to his game.

Also sharing the lead with Couture and Roy is Jamie Kureluk, who carded a 68 with four birdies and one bogey. “My irons were definitely the strongest part of my game today. I kept the ball in play off the tee, and kept a clean look at the pin each hole. The greens were fairly quick today, and I found that I had to control the spin, so I ended up hitting one extra club to make sure that it was under control and ended up with a few 20 footers today. Tomorrow I am planning on trying to do much of the same as I did today, and that is to keep the ball in play, as I am sure a lot of the player have mentioned that it is a tricky course if you hit it off target”.

This is the first year that Kureluk has played in the Titleist & FootJoy Canadian PGA Assistants’ Championship. He has spent the last few years on the road playing competitively. “This is my first year at this tournament as I have been playing competitively on the Canadian Tour over the past few years. I played on the Canadian Tour in 2002, 2003, and 2006 while also playing on the Dakota Tour. This is my first tournament in Quebec at this level, and it has been great so far. It is always good to play for a National Championship. Competing against everyone in the country and doing well is an amazing feeling,” stated Kureluk.

Past Champion Phil Jonas of British Columbia shot a 69 with five birdies and three bogeys, hitting 15 greens in regulation. “I struggled a bit starting out; I actually haven’t been feeling that well lately. My first hole, which was the tenth, I thought I lost my ball, but luckily found it and chipped it in for par. I played the par five’s well and birdied two of the three”. Jonas, who is competing in this championship for the fifth year, believes that the field for this year’s championship is the strongest in Canada: “This is the best field in Canada for guys who aren’t touring pros,” said Jonas. Barber, who carded a 69 today also agrees. “Competing for a National championship is great in itself, and I don’t think right now that there is a better field that you could match up against the one we have this week. This field could easily match up against the field at the Canadian Professional Championship”.

It was a successful day on the course for both the Alberta (Belbin-69, James-77, Kureluk-68, Walter- 81) and Quebec (Bouchard-70, Cuthill-70, Saunders-76, Dumouchel-74) Zones in the InterZone team competition. Both zones tied at the end of the first round each scoring 214 combined. The score is determined by the calculation of the best three scores in each four man team. The second round of the InterZone competition will continue tomorrow where a winner will be determined. The purse for the InterZone competition is $5000, with $500 going to each player on the winning team, $400 to each player on the second place team, and $350 going to each player on the third place team.
The second round of the championship will take place tomorrow, with the field being cut after the first 36 holes to 70, plus ties. The first tee time will commence at 7:45AM with the last group departing at 1:12. For pairings and results please visit www.cpga.com

Val des Lacs was built and designed by architect Howard Watson in 1959. He designed many courses in the Montreal and Toronto region, like Lachute Golf Club (past host of the Canadian Open) in Montreal and the Board of Trade in Toronto.

The total purse for the Championship is $45,000 and the champion will receive exemption into the 2007 PGA of America Assistant Professional Championship in Port St. Lucie, Fla along with the $6,500 first place cheque.
Weather: Sunny and 25 degrees