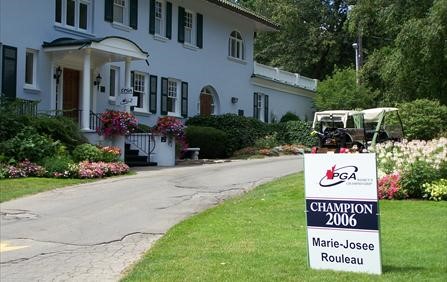 ACTON, ON (July 26, 2007) – The Ladies’ Golf Club of Toronto in Thornhill, Ontario is preparing to showcase their facility and host the Canadian PGA Women’s Championship presented by Aquafina. The event is returning for its third year since the club hosted the inaugural Championship in 1987. The event will take place from July 29th – Aug 1st, 2007.

“We are delighted to return to The Ladies’ Golf Club of Toronto for the 20th anniversary of our Women’s Championship,” stated Stephen Carroll, Executive Director of the Canadian PGA. “To return to a club with such great history and to be able to showcase the finest Canadian women golfers is something we are looking forward to.”

Activities will begin Sunday, July 29th with registration and practice rounds. On Monday, July 30th the Simmlands Championship Pro-Am will commence at 1PM after lunch in the gardens for all contestants. The day will finish with wine tasting and hors d’oeuvres followed by prizes. Cathy Sherk, the first ever winner of the Canadian PGA Women’s Championship, will be present at the ceremony following the Pro-Am.

“We are pleased once again to be the presenting sponsor of this great event,” said Marc Boria, Director of Field Marketing at The Pepsi Bottling Group. “Each year we are treated to a great showcase of our nation’s top female golfers.”

The Ladies’ Golf Club of Toronto is North America’s only remaining private golf club established by women for women. Founded in 1924 by Ada Mackenzie, Ladies’ was designed by renowned course architect Stanley Thompson.

In the early 20th century, it wasn’t easy for female golfers to get access to tee times and practice facilities. Ada Mackenzie was a talented young golfer from Toronto who found a solution. Ada had played in amateur tournaments in the U.S. and Britain and, during one of her visits to Britain, she noticed golf clubs exclusively for women. Ada dreamed of creating a women's golf club in Toronto and set about getting financial support for her venture. After much hard work and fundraising, Ladies’ Golf Club of Toronto Ltd. was established in Thornhill in 1924. Actual play began on August 23, 1926, with a match between Ada Mackenzie and Helen Paget of Royal Ottawa Club.

The 36-hole stroke play championship will be contested on Tuesday and Wednesday at The Ladies’ Golf Club. The total purse is $30,000 with $5,000 awarded to the champion.