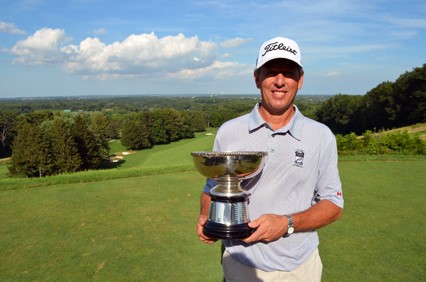 It would take four playoff holes before 2013 Mr. Lube PGA Seniors’ Championship of Canada presented by Adams Golf winner was decided, but the wait was definitely worth it.

Canada’s two best senior golfers—Jim Rutledge, who was looking to win his second straight PGA Seniors’ Championship (and third since 2010) and hometown favourite Rod Spittle were tied after 54 holes of play Friday at Lookout Point Country Club in Fonthill, Ont.

The final day began with Spittle holding a one shot lead, but by the 12th hole, he stretched his lead to five shots.

“I was behind the eight-ball with eight holes to go,” Rutledge said. “But the 12th turned my whole game around and I was pretty fired up after that.”

On 523-yard par-5 12th hole, Rutledge hit a pair of three woods before sinking a 35-foot eagle putt, cutting Spittle’s lead to just three shots. The Victoria native picked up another with a birdie on 16, before drawing even after a Spittle bogey on No. 17.

The first playoff hole (No. 18) saw Rutledge with a chance to end the tournament, but the 53-year-old missed a four-footer from above the hole.

“It was one of those putts you can’t take a run at because you’ll have 15 feet coming back if you miss it,” Rutledge said about his wasted opportunity.

On the second playoff hole (No. 1), both made birdies and would head back to the 18th for the third extra hole. This time around, however, Rutledge had a putt—on the similar line as the one he missed earlier—to extend the playoff.

“The second time around I was off the back edge of the green and had nothing to lose,” Rutledge said. “So I played the same break as the first time and the last six inches it broke in the hole and I was really thankful for that.”

Rutledge’s kick-in birdie on the fourth playoff hole secured his victory, making him the seventh player to win the PGA Seniors’ Championship of Canada three or more times.

“I hadn’t really been playing well heading into this week,” Rutledge admitted after his round. “But this win will definitely give me confidence into the last bunch of weeks on the Champions Tour.”