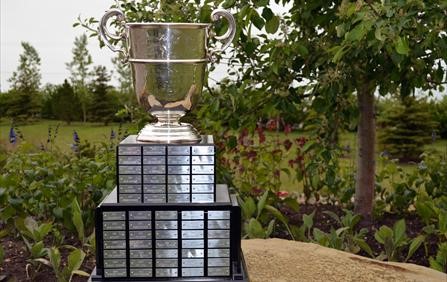 PGA Championship up for grabs

Three of the top four seeded players at the PGA Championship of Canada sponsored by Mr. Lube and presented by TaylorMade-adidas Golf were ousted Wednesday at Country Hills Golf Club’s Talons Course.

“The seeding in this event is just a number,” Bernakevitch said after his match Wednesday afternoon. “We’re all evenly matched in my opinion; we’re all great players and it just matters how you play on the day.”

Boudreau, who made six birdies in his match against McCann on a Talons Course that saw less wind than Tuesday, agreed with Bernakevitch, saying the talent level amongst PGA of Canada professionals is impressive.

Bryn Parry (Seymour Golf Centre) is the highest seeded player at No. 3 remaining after his 3&2 victory of Keir Smith (The National Golf Club of Canada).

Coincidentally, with McCann, King and Burgeson all losing Tuesday; Parry, Levesque and Belbin all still have a chance to earn an exemption into next month’s RBC Canadian Open.

The player who sits atop the PGA of Canada Player Rankings presented by RBC at the conclusion of the PGA Championship of Canada earns an exemption into the RBC Canadian Open at Hamilton Golf & Country Club in Hamilton, Ont., July 23-29.

McCann currently sits atop the Player Rankings with 160 points. Should Parry, Levesque and Belbin not advance at least to the championship’s semi-final matches, McCann would maintain his spot at the top and earn the exemption.

As was the case in 2011, this year’s championship is contested as a match play event with players from four brackets—Stan Leonard, George Knudson, Al Balding and Moe Norman—looking to advance through the six rounds to the final championship match Friday at 1:30 p.m. at the Talons Course at Country Hills Golf Club.

The eventual champion will not only earn a share of the $100,000 purse, but will also capture the historic P.D. Ross Trophy.

Third round matches take place Thursday morning, while the quarter-finals go down on Thursday afternoon.

To view all match results from Wednesday’s second and to view live scoring of Thursday’s third round and quarter final matches, CLICK HERE.

For more information about the PGA of Canada, visit us online at www.pgaofcanada.com