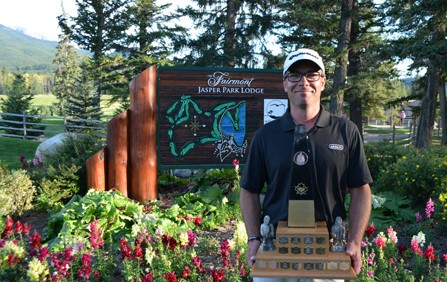 Belbin, who won last year at the Cherry Hill Club in Ridgeway, Ont., posted a final round 1 under-par 70, bringing his three day total to 12 under, two shots clear of a trio of players.

“This one seemed way harder than last year,” Belbin said after his round. “I played good today even though I lost some of my feel on the greens”

Admitting he felt nerves and adrenaline on the first tee and throughout his round, Belbin’s shaky putter led to costly three-putt bogeys on hole Nos. 1, 6 and 9. However, four timely birdies on the second, fifth, eighth, 10th and 15th holes proved enough.

With the win, the 37-year-old Sherwood Park, Alta., native becomes the first player since Serge Thievierge in 1979-80 to win the PGA Assistants’ Championship.

“To be put in the same sentence as a guy who has become a PGA of Canada legend is pretty awesome,” Belbin said. “Maybe one day 20-years down the road someone will say that about me.”

“This week at the Fairmont Jasper Park Lodge has been absolutely amazing—from the resort, to the golf course, to the weather, it’s been world class,” says PGA of Canada President, Gregg Schubert. “And, the golf played this week has been absolutely world class as well—more than 20 players under par is fantastic and it just proves how impressive our members our on the golf course.”

Dale Machesney of the Salmon Arm Golf Club made the only hole-in-one of the championship, holing out on the world famous ninth hole, ‘Cleopatra.’

The PGA of Canada Player Rankings presented by RBC were updated after final round play and Brian McCann (The Academy at BraeBen) regained top spot with 189 points. Belbin moved to second 181 points, with Walsh jumping to sixth and Millage moving into the top 10 at No. 10.

The full leaderboard and be viewed here.