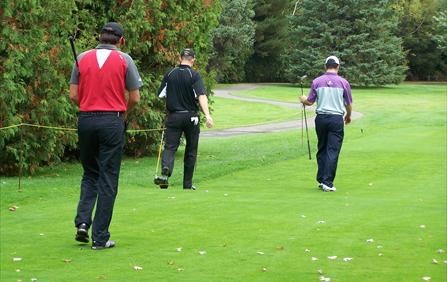 STE-SOPHIE, QC (September 25, 2007) - Host Assistant Professional Eric Couture is in the hunt for his first Canadian PGA National title. While it’s tempting to want to start engraving his name into the trophy, Andy Holborn from Toronto, Ontario is on his tail, two shots back of the lead at the 2007 Titleist and FootJoy Canadian PGA Assistants’ Championship presented by Simmlands Insurance at club de golf Val des Lacs in Ste. Sophie, Quebec.

Couture carded a 67 today with four birdies and 14 pars to add to yesterday’s 68, putting him seven-under going into the final round. “I made no mistakes today,” said Couture, “I think the only time I was in jeopardy of making par was on the last hole, where I sunk a ten footer, other than that, I kept patient with my wedges, got the ball on the green, and had nothing longer than a four footer for par all day.” Going into to the second round, Couture was in a three way tie for the lead with Jamie Kureluk of Calgary, Alberta and Jon Roy of Beaconsfield Quebec.

The wind was gusting across the course in the early morning, then settled mid-day, only to pick up again in the afternoon affecting the play of the participants. “The conditions on the front nine were the same as yesterday although there was much more wind today in the morning, so I found the back nine easier”. With rain in the forecast for tomorrow, Couture is planning on trying to remain consistent. “Going into the final round, I am going to focus on doing the same thing that I have done over the past few days, try to make birdies on par five’s, stay patient, and keep my ball in play”.

Couture, who has not shot below seven-under in a tournament since college, says he is not worried about the pressure to perform. “I am sure that some people want me to perform, but I am feeling no pressure right now,” says Couture. “I am sure that tomorrow I might feel some on the back nine when I am finishing the last few holes and hearing the other scores, so that is why today I tried to get as much of a cushion as possible leading into tomorrow’s round. I have never reached double digits, so that is a goal that I have for tomorrow, to be under by at least 10”.

Andy Holborn of Toronto, Ontario had a stellar round considering the conditions in the afternoon, firing the tournament low score of 65. “I had a great start to my round, especially on three where I holed out of the bunker for eagle, so I ended up six under for my first six holes, and finished with 30 after the front nine,” said Holborn. “Putting is what made my round today. I hit 13 greens and had about 25 putts all day, and think I only missed one, which was a two footer”.

Holborn, who won the Ontario PGA Match Play event last week and played in two Great Lakes Tour events this year, says that he has enjoyed the event so far. “The course is very difficult out there but it is in great condition, and that is what makes it so great for tournament play. The Canadian PGA and their Quebec Zone are putting on a first class event, where everything is taken care of; from the accessibility of equipment at the range, to the hotels, to the transportation, the only thing you have to worry about is playing golf, and I know the guys appreciate it and are having a great time”. Holborn is looking forward to the final round and a possible National title. “Tomorrow, I will try to play more aggressively, like I did today, but really, every day is a new adventure for me out there, so I’m excited to see where it takes me tomorrow”.

Remi Bouchard of Le Mirage, Quebec fired a 69 today with four birdies and two bogeys, putting him at three under going into the final round. Bouchard found the testing conditions in his favour today, as he states that his game is stronger in the wind. “To tell you the truth, yesterday’s perfect weather made it difficult to focus, I like to play in trying conditions, as I tend to play better. Yesterday I played horribly off the tee, and today was much better so I plan to make sure that I keep the ball in play and stay consistent”.

Quebec continues to have a great day, winning the InterZone team competition, after competing against six other zones in Canada. Going into the final round tied at 214 with Alberta, the Quebec team (Remi Bouchard, 70-69, Gregg Cuthill, 70-73, Luke Saunders, 76-76, Vincent Dumouchel, 74-75) arrived victorious with a final score of 431 over the Ontario Team with a total score of 435, and British Columbia at 442. The score is determined by the calculation of the best three scores in each four man team. The purse for the InterZone competition is $5000, with $500 going to each player on the winning team, $400 to each player on the second place team, and $350 going to each player on the third place team.

The final round of the championship will take place tomorrow, with the field cut from 120 players to 70, plus ties. The first tee time will commence at 8:00AM with the last group departing at 12:00 noon. For pairings and results please visit www.cpga.com

Val des Lacs was built and designed by architect Howard Watson in 1959. He designed many courses in the Montreal and Toronto region, like Lachute Golf Club (past host of the Canadian Open) in Montreal and the Board of Trade in Toronto.

The total purse for the Championship is $45,000 and the champion will receive exemption into the 2007 PGA of America Assistant Professional Championship in Port St. Lucie, Fla along with the $6,500 first place cheque.
Weather: Sunny and 28 degrees winds gusting out of west