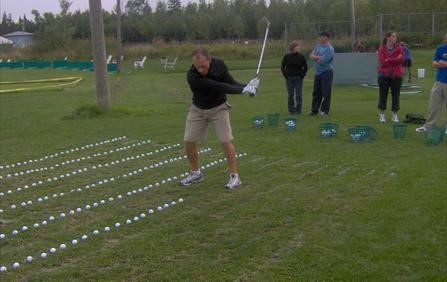 ACTON (September 10, 2007) - On Sunday, September 9th, 2007 at 10 am, at the Lakeshore Driving Range in North Bay Ont., Canadian PGA Member Glenn Cundari, attempted to beat the current Guinness World Record of the number of golf balls hit within an hour.

Unfortunately Cundari fell short of the record, hitting 1888 out of 2146 balls into the target but raised over $17,000 for KidSport North Bay in the process.

The current Guinness World Record to beat is 2,146 – about one every 1.7 seconds. The criteria of the event states that each ball must travel 100 yards and land within a specific sized grid. The regulations do allow for the balls to be loaded by another person(s) but only within a 5 square yard area.

“It was such a great event, it was so much fun. We had over 400 people watching with seven or eight media outlets present,” said Cundari. “Even though I didn’t break the record it was still a successful event by raising funds and awareness for KidsSport. I did some calculations and realized that with the money raised, about 68 kids in North Bay will be able to register in organized sport, so that is pretty amazing.”

When asked if he will attempt to beat the record again, Cundari stated that he will leave that task up to someone else , and focus his attention on another fundraising opportunity in the near future