Bryn Parry - The Year On Tour 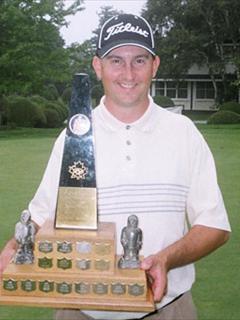 ACTON, ON (April 27, 2007) - The Canadian PGA announced today that CPGA & Nationwide Tour Member Bryn Parry will be participating in a weekly blog on the NEW Canadian PGA website ( www.cpga.com ) starting on May 2, 2007.

The blog – “Bryn Parry – The Year on Tour” – will provide a backstage pass inside life on the Nationwide Tour as seen by Parry in his inaugural year as a Tour Member with full playing status.

Parry earned full membership status on the Nationwide Tour this year after making it through the first two stages of PGA Tour Qualifying School before finishing in a tie for 41st place in the final stage. His 7–under par total in the grueling five round tournament final stage left Parry one shot away from getting his PGA Tour card for the 2007 season.

“I’m thrilled to be a part of this opportunity with the Canadian PGA,” said Parry, a Vancouver native that has worked as a CPGA Teaching Professional at Seymour Creek Golf Centre since 2004. “I hope I can give everyone a behind the scenes and inside the ropes feeling with my blog each week.”

Parry completed one of the most remarkable seasons in Canadian professional golf history and arguably around the world in 2006. The magical season included 16 victories and Top – 5 finishes in 32 out of the 35 events that he played in. Add to that a record 3rd CPGA BC Zone Player of the Year award, a 3rd place finish in the Titleist & FootJoy Canadian PGA Assistant’s Championship, a victory in the 2006 BC PGA Assistant’s Championship and Parry didn’t leave much for his competitors other than someone to chase.

"The Canadian PGA is proud of the accomplishments that Bryn Parry has achieved,” said Warren Crosbie, President of the Canadian PGA. "The Canadian PGA and its’ Members will be cheering Bryn on in his journey and this blog will allow everyone an opportunity to follow along."

Parry is also a two-time winner of the Titleist & FootJoy Canadian PGA Assistant’s Championship, winning the 1999 event at Whitevale Golf Club in Ontario and the 2005 event at The Briars Golf Club in Jackson’s Point, Ontario.

Parry’s best finish through four events on the 2007 Nationwide Tour is a T-30th finish at the Livermore Valley Wine Country Championship at Wente Vineyards, California.

Bryn Parry – The Year on Tour will begin on May 2, 2007 and will be updated every Monday during the 2007 Nationwide Tour season on at www.cpga.com/blog/index.aspx